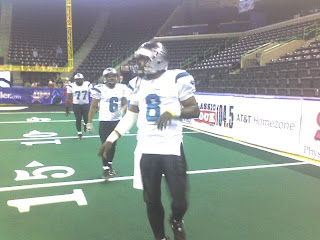 (Corpus Christi, TX) – The Bossier – Shreveport Battlewings exploded for 40 second half points to cement a 62-27 win over the Corpus Christi Sharks. With the win, the Battlewings improve to 5-0. The five wins to start the season account for the longest winning streak in franchise history.
The Battlewings opened the scoring when Quincy Carter passed six yards to Marc Bacote for a 6-0 lead with 3:22 remaining in the first quarter, and they never trailed. Carter touchdown tosses to Manwell Talbert and PJ Winston, combined with a 23 yard Brian Hazelwood field goal made the score 22-0 before the Sharks were able to find the end zone. It was 22-7 at the half.
The Sharks closed to within eight points, 22-14, at the start of the second half. But Carter responded with a 27-yard touchdown pass to Talbert to create a little cushion at 28-14. A Jason Schule touchdown run made it 35-14. The, The Battlewings’ Ken Williams scampered 35 yards with a fumble recovery for a touchdown and the Wings had a 42-14 lead at the end of the third quarter.
Schule ran for another score and Jamaal Perry caught two fourth quarter touchdown passes to round out the scoring. Carter completed 15 of 25 pass attempts for 235 yards and six touchdowns. Perry, who was named offensive player of the game, caught five passes for 66 yards and two touchdowns.
Bossier-Shreveport sack specialist Elex Reed had one sack in the game and applied consistent pressure to Sharks quarterbacks and earned defensive player of the game honors.
PJ Winston, who caught four passes for 74 yards and a touchdown, also played defensive back after “Boss” Walker was injured in the third quarter. For his efforts, Winston was named Ironman of the game.
The Battlewings will play the Arkansas Twisters in North Little Rock next Saturday and will be at home the following Friday against the Manchester Wolves.