(Corpus Christi, TX) - Corpus Christi's got it going on. It's apparently the Whataburger captial of the Universe. I'm sure there's a legitimate, easily explained reason for this; but I haven't bothered to research it. There are Whataburger restaurants everywhere. The baseball park, home of the Corpus Christi Hooks (reigning Texas League champions, Astros' double-A, owned by Nolan Ryan)is named Whataburger Field. If you like a Whataburger, this is the place to be. 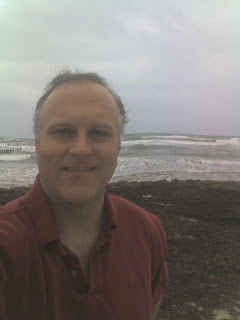 "Corpus," as it is known affectionately by those in the region, is a much bigger city than I thought. It has everything your average American middle-sized city needs, plus beaches. I woke up early this morning and drove to the end of the world, Texas style, and found myself in a national park on an undeveloped beach. It was great! The wind was howling at about about thirty miles per hour, surf was pounding and there were no tall buildings, almost no litter, and very few people. I felt like I had gone back in time.
Later, yearning for civilization, I made my way to Port Aransas, a typical beach town with juust about everything you'd expect. There, I spent more conventional beach time surrounded by people with kites, umbrellas and all the usual beach stuff. 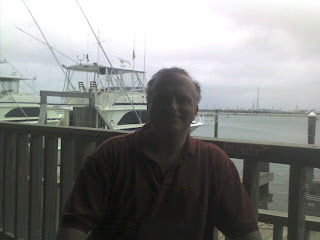 (Daddy D cell phone self-portraits) The waves were coming in at about six feet, so not many people were venturing into the water. Still, I never expected to spend a Saturday at the beach. So, bonus beach time for me. I even took the opportunity to have lunch on a deck near a marina. The shrimp were fresh, the beer was cold and the breeze was brisk.
I don't think this would be a bad place to live. For a sports fan there's the excellent minor league baseball, an Arena Football team, another indoor team, minor league hockey and a Division I university that sent its basketball team to the NCAA tournament this year. If you need big city stuff, San Antonio and Houston are nearby. All that and beaches! And don't forget the Whataburgers.

Whataburger started in Corpus, and its headquarters are located there. There, a minor mystery of the universe solved.

That's pretty much what I was assuming, but I feel better now. Thank you.