Manchester 52, BOSSIER-SHREVEPORT 62
(Bossier City, LA) – The Bossier – Shreveport BattleWings, playing without star quarterback Quincy Carter or spectacular deep safety “Boss” Walker, remained unbeaten at home in 2007, defeating the Manchester Wolves, 62-52.
Gary Cooper, starting at quarterback in place of the suspended Carter, completed 19 of 29 passes for 210 yards and threw touchdown passes to five different receivers in his af2 debut. For his efforts, Cooper was named the Schutt offensive player of the game. 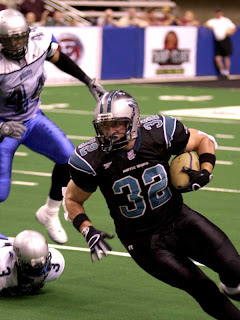 The star for the Battle Wings, though was Jason Schule, who carried the ball eleven times and scored three rushing touchdowns. He also caught a touchdown pass from Cooper. Schule, who also plays on kick coverage and made an appearance at linebacker, was named U.S. Army Ironman of the game.
The af2 sacks leader, Elex Reed, had two tackles for losses and one sack, but the ADT defensive player of the game is linebacker Marc Bacote, who made a spectacular interception at the goal line to thwart a Manchester scoring opportunity.
Carter is on team suspension for a violation of team rules, but the Battle Wings hardly missed him. They scored first when Cooper connected with Manwell Talbert for a first quarter touchdown pass. The teams traded scores for most of the first half. The Battle Wings took the lead at 20-19 when Cooper hit Anthony Chambers for a 46-yard scoring play with 6:16 remaining in the second quarter, and they would not trail again. Bossier-Shreveport created a little distance with a 1:45 remaining before halftime when Jamaal Perry took an end around fro the four yard line and scored to give the Battle Wings a 27-19 advantage. 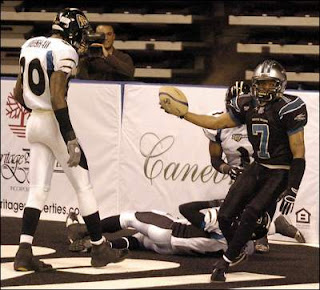 Perry amassed 130 all-purpose yards, but PJ Winston was the Wings' leading receiver with four catches for 73 yards.
Manchester quarterback Mark Radlinski, playing his first game in a Wolves’ uniform, was 48 of 41 for 299 yards and four touchdowns. He threw an interception deep in Bossier-Shreveport territory, though, and fumbled the ball inside his own five yard line twice in the game.
Boss Walker is out of the line-up with a broken wrist. Brent Withers played in his place and recorded 11.5 tackles along the way.
The Battle Wings improve to 6-1 in 2007, while the Wolves fall to 3-4 and winless on the road.