What? Me Worry? Alfred E. Neuman Was Right 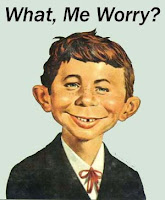 I spend most of my time these days worrying. I worry about my kids. My son is 17 and I worry he's going to get into trouble. I worry that he will suffer some social pitfall that will derail him emotionally and academically. I worry that my 15-year-old daughter will be corrupted or hurt by a boy or will get caught up in some kind of social atmosphere that will derail her emotionally and academically.
I worry about my wife because she worries about the kids all the time. She worries about her aging parents and together we worry about our niece in Texas. She's 15, and we've already covered that ground.
I worry about my father, who sounds older and weaker every time he calls me. His short-term memory is shot, he doesn't sleep well and he's still falling down every once in a while.
I worry about my buddy Ron, who had cancer surgery this week. I know he's probably suffering physically and emotionally, but he says he's not worried. I worry because he's not worried, but I am.
I worry because the long-time leader at our church is leaving this summer and I think the committee searching for his replacement has high potential to screw it up.
I worry at work, of course, because I've got a New Thing and I'm not supremely confident I'm going in exactly the direction The Big Boss wants. I worry about a couple of people I left behind at my Old Thing at Work because I believe they had sort of come to depend on me.
I worry because the stock market is "correcting." I worry because our guys are getting blown to bits in the Middle East and I'm starting to lose confidence that we're doing the right thing over there. I worry that I'm losing confidence about that.
I worry about the fact that I've behaved badly at times in the past and I know I've hurt and offended people. I know there are people who really don't like me and I worry that they have legitimate reasons. I worry that I will never have an opportunity to apologize to many of them because I don't know who they all are or where they all are.
I worry because when I start worrying, it's like someone opened an insecurity valve in my brain that spews out a stream of negativity which pools in the little depressions of my own self-loathing.
I worry that it takes me longer and longer these days to snap out of it.

Hike your butt up to Sunshine Health foods store. Get some Calm Advantage with L-Theanine and 5htp. It will de-worry and de-stress you plus take away your appetite. L-Theanine is the stuff found in green tea.