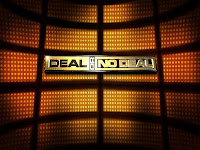 Our man Stan Stava made his network television debut on "Deal or No Deal" Monday night. He won 107 Grand! One hundred seven thousand dollars. Stan played the game well, recovering well after knocking the million dollar case out of play with just his second selection. The $107,000 offer was the second-highest amount offered by the banker during the course of Stan's round.

As the game played out, it turns out Stava made an excellent deal, because the case he chose at the start of the game was worth just $10,000.
I talked to Stan last week, after the taping but before the show aired. While he couldn't say how much he won, from his tone it was clear he had done well. He said he had played the DVD and/or on-line version of the game more than 200 times before he got his shot at the real thing. He hardly hesitated during the game, because he chose his numerical sequence in advance and stuck with the plan.
Fittingly Stava, who had a fledgling advertising agency, held his Monday night watch party at a client's business. You gotta work it.
Speaking of working it, Stan brought yellow roses for all the models. When host Howie Mandel asked Stan if he had a favorite, he singled out Lisa Gleave. The other models played off of Stan's stated desire to have "one date" with Lisa. I don't know if it happened, and I'm not asking. Stan did choose wisely in more ways than one.
It was surreal to see people you know on a TV game show. One of the friends he took along was Kay Casson, who like Stan was an account executive at KTAL. He also took along his priest and pledged in advance to give part of his winnings to his church. The weirdness continues, because the priest, Fr. John Raish, was most recently the rector at the church at which my father-in-law (also a priest) was serving when my wife and I married. Nobody ever hit it big on a game show while he was running the place.
Sphere: Related Content