The Tale Of T-Pac and Heavy G.

There is a certain amount of decorum necessary in professional settings. Media members, even in medium-sized cities like ours, should show deference to the people with whom they are interacting. If a reporter is interviewing a physician, for instance, he should address the interview subject as "Doctor so-and-so." When the camera is turned off, if they are comfortable being informal, that's terrific.

It became commonplace for broadcasters in this market to refer to Mayor Hightower as "Keith" in interview situations. It was inappropriate and unprofessional. Something happened in a public setting this week which took this to a new level. 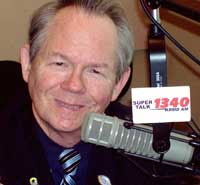 Mayor Cedric Glover addressed the Rotary Club of Shreveport. Following his formal remarks, he accepted some questions. In the group was local radio personality Tom Pace, who was a visiting Rotarian. The mayor recognized him and called on him by using a psuedo-hip hop nickname, "T-Pac." Obviously, these men know one another well. What happened next was a little disturbing. Mr. Pace responded in kind, acknowledging the mayor by referring to him as "Heavy G."

He called the mayor, in a public setting, "Heavy G." Being friendly and informal with the mayor is a good thing. Undermining his dignity is something altogether different. Mr. Pace deserves the benefit of the doubt here because the mayor opened the door and Pace just walked through it with him. Both men are culpable here. Mr. Glover is new in his office and is being scrutinized carefully. We all need to watch our manners.
Sphere: Related Content