While I am a member of an Episcopalian congreation, I am a baptized, confirmed and married

Roman Catholic. Father Peter at the Catholic cathedral in Shreveport would take indignant exception to this, but I claim dual citizenship. Hey, it's between God and me where my heart is. I present this background because it's a Friday in Lent and I'm avoiding the consumption of meat.
Today, for instance, I had no breakfast. Then, I had a fish sandwich at lunch. I'm not following Canon Law, but at least I'm participating in some way. I'm thinking Big Salad for dinner. 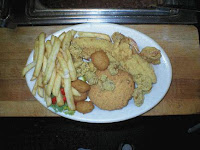 Last Friday, I went to a "shrimp and oyster night" buffet. I rolled through and got, you guessed it, shrimp and oysters. I also got a piece of fried catfish. When I took a bite of the fish, I discovered to my dismay that it was, in fact, chicken. Hey, it looked like fish and logic seemed to lead me to conclude that it would be fish, but it just wasn't.
So, there was the condundrum. If I wasted the food, that clearly would be a sin. If I finished the chicken, I would at the very least be in violation of tradition. My devoutly Catholic cousin Randy, who has emerged as my father's spiritual advisor, no doubt would have something to say about this. I hope my dear friends Mark and Andrea in Texas, the most Catholic people I know, don't think less of me for this, but I finished the chicken. It was a snap judgment, I made it and now I live with the consequences.
Please don't tell Father Peter.
Sphere: Related Content