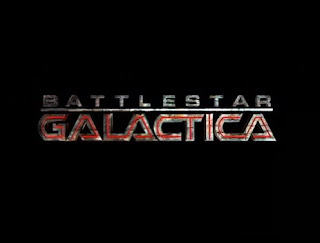 This is a bittersweet week for the BSG Geeks. Count me among them. There is no show on television to which I am more devoted than "Battlestar Galactica," which airs on the SciFi Channnel. This is not a typical space-jockey show, but a wonderful social/theological/ political drama which is set in outer space. If you have not seen the show, do yourself a favor and buy the DVD's. You have to start with the mini-series and move forward. Absolutely, it is worth your time.

The season finale will air this Sunday night. For the show's devotees, the final episode of 2007 is set up to be enormous. The show's creators have said the series is a play in three acts, and last week's show was the start of Act III. All indcations are, the season will end with some spine-tingling (for fans) revelations. We will apparently have to wait until after the first of the year, Sopranos-Style, to find out what happens next. There is great news: SCI FI Channel has upped its episode order for season 4 of BSG from 13 to 22 episodes. This will include a special two-hour extended event that will air during fourth quarter 2007 and be released on DVD. Production on the new season of Galactica is expected to start in May. Here's some news release stuff, which is all true: Redefining the space opera with its gritty realism, BattlestarGalactica’s intensity, issues-driven topicality, and command performances have garnered it unprecedented critical acclaim. In addition to winning a prestigious Peabody Award, the series has been honored as one of the 10 Outstanding Television Programs of the Year by the American Film Institute (AFI) for two years running. I can hardly wait for Sunday, and I'm sick I'll have to wait so long to find out what happens next.

Is it okay to admit you watch American Idol? Why is there shame in that? It's clean. It's funny. The American dream is alive and well on it. You don't get the creeps when you watch it with your kids. More people watch it than any other TV series, so why must we stay in the closet? I watch it twice a week. Yes, I do.

Conversely, Two and a Half Men is slightly perverse. Yet, it remains perhaps the funniest show on TV. I TiVo it and watch it late in the evening.
I'm excited about the return of "Entourage," and "The Sopranos." I wonder when "Curb Your Enthusiasm" is coming back.
I finally caved in to pressure and forced myself to watch

"The Office," and now I'm hooked like everybody else. My friend Andrew delivered the first season of "My Name is Earl" to me on DVD. Now, I get what all the fuss is about. It's laugh out loud funny.
I remain hopeful that "Studio 60 on the Sunset Strip" will be renewed. I like the whole cast and really enjoy producer Aaron Sorkin's work. I've pretty much given up on "Lost," but my wife still likes it.
"Desperate Housewives" is a distant memory in our house. My TiVo gets "House," "CSI: Miami," "Cold Case" and "Without a Trace." We will watch those recorded shows, in that priority, if we are sitting around the house bored.

Finally, my wife, my daughter and my son's girlfriend are hopelessly devoted to "Grey's Anatomy," of course. I've learned to take my eyes off of Izzy. I don't think Meredith is all that attractive. The only thing I have to counter McSteamy and McDreamy is Addison and she's getting her own spin-off. I think I'll pick up a good book.
(Katherine Heigl as "Izzy," above)
Sphere: Related Content

So, who is your pick on American Idol? What do you think of the campaign at votefortheworst.com ? I am ready for Sanjaya to exit stage right, along with the crying girl...ARGH!

I totally get your wife, your daughter and your son's girlfriend with their love of Grey's Anatomy. Finally we got a little Mer/Der action this past week...AAAH!

I'll be shocked if Melinda doesn't win, but the voting this year shows there's a real chance that something stupid will happen.
The fact tht Sanjaya will be on the tour is astounding, however he has clearly arrived as a celebrity. When you are spoofed on Saturday Night Live, you are somebody.
I think Lakisha will fade. Jordin and Blake are contenders.
Haley sings like she's in a beauty pageant or something. I don't know who's voting for her. I miss Antonella.