A couple of stories in the paper jumped out at me Wednesday morning. Let's start with Rodney Watson, tabbed to be the new assistant superintendent at the Caddo Parish School Board. The story tells us that the school board has to change up its reporting structure because Mr. Watson, under the present arrangment, would be his brother's boss. Here's a little more detail for you. Mr. Watson and his brother Randy are identical twins. One is a little heavier than the other and they comb their hair differently, so they are relatively easy to distinguish. With minimum effort, though, they could pass for one another. I suspect in the first few days of Rodney Watson's tenure, there will be some confusion. The Watsons grew up in Queensborough, so this is a homecoming for Rodney who has been in exile in Baton Rouge for many years.

The family is big into public service. Their older brother Harvey is the Risk Manager for the City of Bossier. Before that, he was a safety and claims manager for the city. Harvey received some national publicity last year for his part in rescuing some California owls which showed up in Bossier. It's family reunion time, I guess. Just so you know, their mother's maiden name was Rebouche. I have insider knowledge. 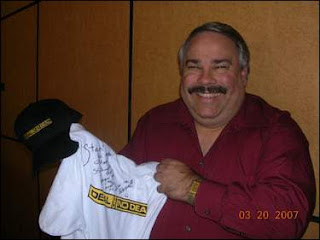 The story that really grabbed my attention concerned an old boddy of mine, Stan Stava. Stan was a contestant on the smash-hit NBC game show "Deal or no Deal." Stan can't say how much money he won, but the show will air Monday night at 7:00. We do know that Stan brought yellow roses for all the models who open those briefcases. I can only imagine that Stan will be entertaining to watch. I became acquainted with him through his television career. He started as the sports photographer at KTAL and later returned as an account executive at the station. He has a zest for life and a real love of sports. Long after his days as a "sports shooter" were over, he would go on his own time to high school football games with a home video camera. If he captured a big finish on tape, he would rush to the station flush with excitement, just wanting to contribute. I really enjoyed having Stan around and I hope he cashed in. The Times reports Stava recently started his own advertising consultant firm, SS Advertising, and sells phone book ads. He hoped to win at least enough to pay back the debt.
Stan told the paper the day he got the call from the producers saying he had been selected was one of the best days of his life. Maybe that's an indication of how he did. We'll find out Monday.
Sphere: Related Content

Thanks for the notice...I rarely read The Times and will be sure to watch next Monday.

The photos you have included in your Blog add a lot to its presentation. Great read, as always~