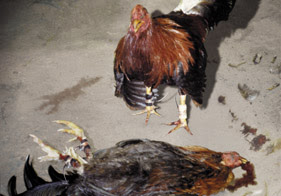 Louisiana distinguishes itself in many ways, a lot of them embarrassing. This is hardly new, but now our state is truly unique. New Mexico has banned cocked fighting, meaning Louisiana is the only state in the USA where idiots can legally force roosters to fight. It's all about gambling and it's certainly not about sport. People raise roosters and train them to maim and kill or be maimed or killed. It's bloodsport and to me it is incomprehensible.
I eat my share of chicken and I don't want to know how the bird I'm frying met its demise. So, I guess I run the risk of being hypocritical any time I bite into a spicy wing. I hear God gave us dominion over animals, but does that mean his intent was for us to abuse them for our amusement? Why not just put a puppy into a microwave or use a cat for target practice? Why is is that we consider people who mistreat animals to be potential serial killers; but someone who gets birds to peck each other's eyes out is just engaging in a time-honored sport, a cultural pastime? There are proponents of cockfighting, and honestly I find that shocking.
I guess I shouldn't. Within the last year, I was involved in a conversation about dog fighting in Louisiana. One group of people was, as you might expect, expressing incredulity and outrage that the practice continues and even thrives in some circles. Out of nowhere, a person in the group said, "my brother and I used to make good money training dogs to fight." The person then went into some distressing detail about the training methods. The room fell eerily silent for a few seconds. Then, thankfully, someone changed the subject.
The Louisiana legislature is expected to consider a cock fighting ban again next month. The last time an enlightened legislator tried to make this "tradition" illegal, the measure died in committee.
This state will never lose its backwater reputation as long as we allow ourselves to be humiliated with circumstances such as this. Having a cultural identity which sets us apart is one thing. Being viewed as a bunch of cruel bumbling simpletons on the bayou is something altogether different.

I had no idea cock fighting was still legal in Louisiana. I don't think it says anything about the state in general though. Coming from a native Californian, I've never thought of Southerners as bumpkins or stupid or any of that. People prove themselves to be that or not by who they are and what they think. There are bumpkin simpletons everywhere, unfortunately.