The Problem With Pokey 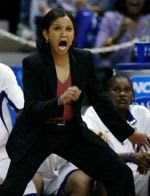 The unexpected resignation of LSU women's basketball coach Pokey Chatman has brought women's basketball to the front page of sports sections around the region. This new-found fascination for the Lady Tigers isn't so much about a run to the women's Final Four. It's about scandal.

The dirty little whispers across the state are about a supposed sexual relationship between Chatman and a player. Of course, all of this is amplified because any relationship that might have developed would be same-sex. A coach engaging in sexual activity with a player is universally frowned upon. When homosexuality is involved, the disapproval often becomes revulsion. Fans and alumni seem to assume that Lesbians are a significant part of the women's basketball population; but when it's shoved into their faces, they often get squirmy.
It's unfortunate that this scandal, if it develops, will overshadow Chatman's accomplishments as a player, assistant coach and head coach at LSU. 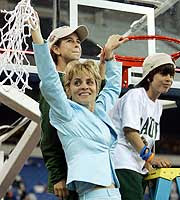 Now, the attention turns to replacing Chatman. The first name to come up: Kim Mulkey, the former Louisiana Tech mega star and assistant coach who is now the head coach at Baylor. Not only is she a south Louisiana native, but she has a national championship on her coaching resume. As a player, she led the Lady Techsters to four consecutive Final Four appearances and two national titles. Many LSU fans think athletic director Skip Bertman should just latch onto Mulkey and pummel her with money until she relents. It's a good idea on a lot of levels. Mulkey is a proven winner, an accomplished basketball tactician, and a traditional family woman (if you know what I'm saying). She won't be out-coached and there's virtually no chance of this kind of scandal repeating itself. Let the full-court press on Mulkey begin.
Sphere: Related Content