This is Tiger Country

There are many things in this state which divide us: politics, race, region, religion are among them. There is one thing that seems to unite us: LSU football. Yes, there are people with ties to Louisiana Tech who will vehemently dispute that. But even people who hate LSU talk about it. So, there's common ground. 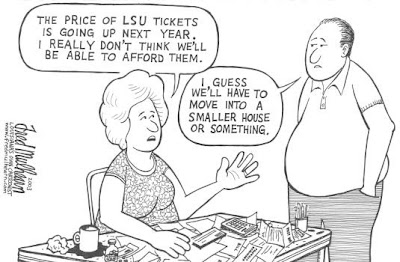 This cartoon, borrowed from Fred Mulhearn's website, pretty much sums it up. How profound is the dedication to the Tigers? A lunch group earlier this week was discussing the notion that the world might suffer some kind of major cataclysm on December 21, 2012. One guy said, "It doesn't matter what happens on that day as long as I get to keep my club seats at Tiger Stadium." I know people who borrow money, use credit cards, do whatever it takes just to maintain their season tickets.
This is a wonderful thing, really. A Saturday night in Death Valley is quite a sensory experience. There's an unmistakable, undeniable lure. LSU football is just part of our culture.
There are those who simply don't grasp this. Several of my former co-workers at a local television station attempted to convince the then-news director that there simply is nothing in our area which commands as much attention as LSU football. He wouldn't hear it, despite the fact that our de facto Tiger lobby crossed gender, age and racial lines. We had a virtual rainbow coalition of persuasion, but he refused to commit resources to covering LSU football right. To this moment, I am convinced it was one of the most colossal errors in judgment the guy made while he worked there. Somewhere, his mommy has him sitting on a training toilet and he refuses to relax.
There was a Saturday not long ago when Louisiana Tech, Grambling, Louisiana-Monroe and LSU all had home games. You could take the attendance for all three games along the I-20 corridor and add them together and they would not equal the number of people at Tiger Stadium that night. Really, it wasn't even close.
If you are in the company of people you don't know that well, you can almost always get a conversation rolling with a mention of Nick Saban, Les Miles, or some kind of quarterback controversy. Even people who have never been to a game in Baton Rouge can at least participate at some level. If nothing else, the people who have had the experience can tell tales of wonder and awe to the uninitiated.
Purple and gold essentially are the state colors. You will find them proudly displayed in every corner of Louisiana. It is common in this state, and it may be unusual anywhere else, for graduates of other state schools to openly and enthusiastically support LSU football.
It's almost as if having strong feelings about LSU is part of the culture of Being Louisianian.
Given the state of things, it's good to have something to hold us together.
Sphere: Related Content