Autumn is hard on the horizon and its aural allure was evident on an arid evening. A symphony of cicada song cascaded across the lawn as the sun set on what had been a restful summer Sunday. The amber light of the fading day offered a reassuring glow as we gently considered the week ahead. The pets joined us on the patio, peacefully reclining and occasionally stirring to indulge in a lazy roll in the grass.
Subtly, a commotion began in the bushes. A corpulent cat, content typically to loll sleepily on the patio, rose to attention. Attentive canine ears perked curiously. A mischievous calico kitten, a moment ago harmlessly napping, suddenly was out of sight. There came a fluttering sound and eight paws cautiously moved in its direction.
The young cat had identified prey. Its older companion seemed supportive. 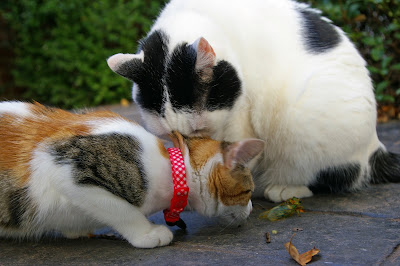 The dog quickly lost interest. The cicada, hopelessly surrounded, tried all the tricks in its arsenal: remaining still, threateningly flapping its wings, using its imposing eyes to appear intimidating. 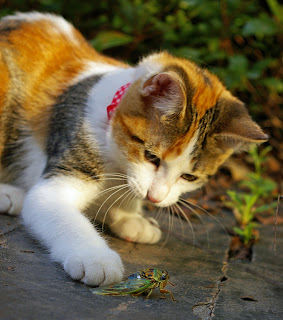 Undaunted, the cats pressed on, toying with the helpless insect for the purpose of their amusement. Interestingly, they chose not to eat it, merely to bat it about between them until they grew bored.
Just as quickly as the adventure began, it came to a nonviolent resolution. The dog gave her feline friends a sideways glance as she lapped water from her bowl. The cats, with some silent communication, came to the conclusion that enough was enough. They moved away in opposite directions, their brief alliance having been entertaining if not productive.
The cicada is alive and well. Who knows for how long? The vagaries and dangers of a bug’s life are not for the timid, but it lives to play another day in the collective song of the southern summer evening.