No Fat Ladies Were Harmed

Inprobably, for the second Saturday in a row, we found ourselves awash in operatic endeavors. You know "that guy you know"? He's the guy you see around, you're not really friends with, but he's a nice enough guy and maybe if things were slightly tilted you would be friends? Well, one of those guys who I know from work and church and the fitness center put together this elaborate program called "The Golden Legend"* and its premiere was tonight at a local Catholic church.

He personally asked me to come and it was obviously quite important to him, so we happily showed up. The crowd was larger than anticipated and sadly there were not enough programs to go around. Among the last to arrive, we didn't get a book, which put us at a distinct disadvantage to those who had one. It seems apparent that the words that were being sung were printed in there, although we were not able to independently verify this.
The acouostics in the church were magnificent. The music was huge and orchestral and the choir was in full throat. I have no idea what they sang, but they sang it well. At halftime (er, intermission), I talked with several fellow attendees, most of whom had programs. They seemed delighted. One man whom I have known since childhood said he was "fully edified." I think he had been reading along. 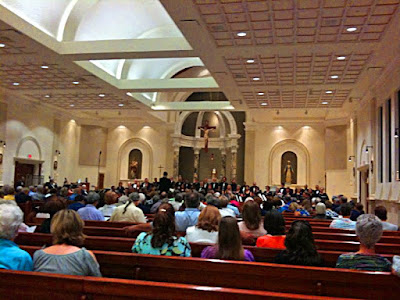 My conversation with my wife went something like this:
Me: "I don't know a lot about it, but to my ear the chick soloists sound better than the guys."
Her: "Yeah, especially the soprano."
Me" "Carmela's here? Or, is it Meadow?"
Her: "The one who sings high."
Me: "Oh. Yeah, she's good."
How absurdly predictable was that? I'm proud for my buddy, who was thrilled with the turnout and the performance. He and his assembled artists received a protracted standing ovation at the conclusion of the program. As I stealthily slid toward the door, I heard at least one "Bravo" being shouted. So, excellent for him.
Enough culture, already. It's time for kick-off.
------------------------------
*A medieval story of temptation & despair redeemed by love written in epic poetic style by poet laureate Henry Wadsworth Longfellow and and scored in lush romantic style classical music by Sir Arthur Sullivan. The result is The Golden Legend -- perhaps Sullivan's most successful and most performed work of music during his lifetime.

The story revolves around Prince Henry, in despair for finding a cure to his mysterious illness, and Elsie, a young maiden who willingly volunteers to sacrifice her life to save the prince. Their lives -- and their souls -- hang in the balance as Lucifer, in multiple disguises, uses his cunning to ensnare and destroy them on their way to Salerno.