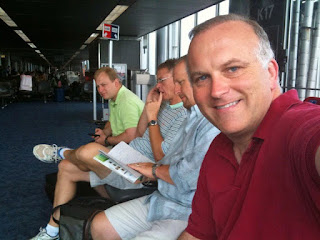 We made it from our hotel to the gate at O'Hare's American Airlines terminal in what must be record time: 38 minutes. That's good news, even though we wound up having to sit around for a lot longer than expected. Everything had been going smoothly. Flights were on time, trains were right on schedule and the (seemingly dozens of) taxi drivers we hired along the way seemed to be taking efficient routes between our destinations. Then, we got on the plane in Chicago. We had been sitting there for about 25 minutes when the pilot announced that the mechanics had given the ol' girl a once-over and she was unfit to fly. So, we got off the plane.
Now this was frustrating, to be sure. The Captain seemed grateful for my response when he spoke to me, seemingly in a random fashion, saying "Sorry for the delay, but it's better to be safe." I said, "Sir, I couldn't agree with you more." 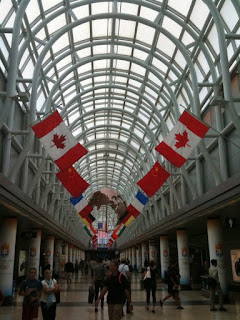 Happily, we were in a major airport and there happened to be a spare MD-80 sitting in a hangar. We were delayed about two hours, but it's not the end of the world.
Here's the thing: the American Airlines personnel at O'Hare said they could not check us through on our new connections, that we had to wait until we got to Dallas. We did not believe them, so we called American Airlines on the telephone. Guess what? The guy on the phone checked us through! We are convinced the people on the ground in Chicago were straight-up lying because they just didn't want to fool with it. What other explanation could there be?
When it was all finished, we got home slightly more than an hour later than we had planned, so it wasn't a big deal, at all.
--------- 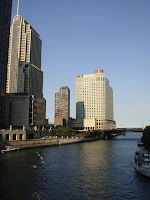 The good people of Chicagoland were nice enough, I suppose. I can't say they were unfriendly. I can say they were for the most part non-friendly. It's like eye contact is some kind of social transgression. It was the biggest collection of isolationist introverts I could possibly imagine. When we, as southerners, tried to engage them in witty folksy banter, they would get kind of wide-eyed. I swear, if small children had been around, those people might have huddled protectively around them. Mostly, they seemed to walk around like robots, staring straight ahead surrounded by some kind of no-speak zone with a mantra something like "don't look at me, don't speak to me, I am safe here on my own little emotional island." When I broke away from my traveling party, I very much felt alone in a crowd.
And, oh by the way...there seems to be some kind of constitutional prohibition on Coca-Cola products there. I've never seen so much Pepsi. Maybe that's what wrong with those people.
It was a great trip, but I'm glad to be home where people engage in conversations and the Diet Coke flows freely.

I saw this link on Facebook that a friend posted who was developing cobwebs at DFW as she pondered walking to Louisiana. Thought I'd have a look to see if there was any entertainment value to the story. I have to tell you that I am totally blown away (not literally) by your way with words - especially the last section regarding the "been dead for a year" personalities in Chicagoland. You are a fantastic writer and I hope you do this for a living. Because, if you do.... I'll be in tune to read whatever you put out there. If you don't - please consider it. You would be an asset to journalism.
Texas Tweety