Smile a While for Me

Over the last couple of days, I've become fascinated with the McCain - Palin ticket. I'm not prepared to reveal my political tendencies, but I have to admit Senator McCain showed a flair for the dramatic with the selection of Alaska's governor as his running mate. I'm grateful for her, because at least now people around here are talking about something besides Haynesville Shale.
I cannot wait for Saturday Night Live to premier. They must do whatever it takes to get Tina Fey back in the fold to play Sarah Palin. The first time I saw a photo of "the next Vice President of the United States," the first thing I thought was "Tina Fey." I'm not the only one. Jon Stewart put up side-by-side photos Friday night on The Daily Show. 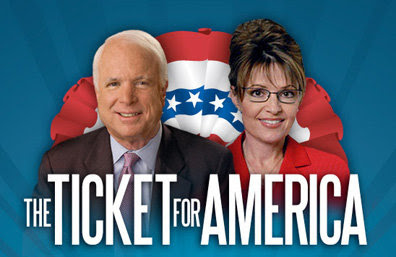 The first campaign graphic I saw looks like something SNL would have generated. This is going to be a wild ride. President Palin? It could happen sooner than you think. BattleStar Galactica fans are already prepared for it. If you don't watch the show, you don't get that, so sorry.
I don't know if Governor Palin will help the Republicans retain the White House, but I do know this: The presidential campaign is now significantly more interesting, and it was already pretty doggone compelling. And, It's a great time to be a late night comedian.

You are so right about Tina Fey. I hadn't thought about that.