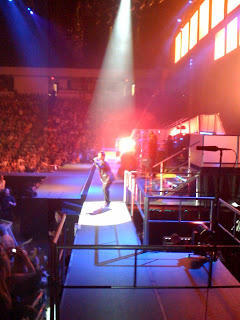 My daughter went all "Beatles on Sullivan" tonight during the American Idols Live! show. She got close enough to David Archuletta to touch him. "My pictures are terrible because I was shaking so much," she said, trembling. Truly, I have never seen her this excited. It's really out of character for her, but she has been charged up about Archuletta since he first rose to prominence on the show. She has been referring to him as "my future husband" for months. It's plausible, I guess. He's just a year older than she is. On the way home from the show, I asked her if he would be allowed to sing at their wedding. She said, "Of course. We'll sing a duet. It will be so sweet!" I'm glad she enjoyed the show.
I went with her, my wife and mother-in-law. The show was nice in a bubble gum kind of way, a perfectly pleasant way to spend a Tuesday evening. 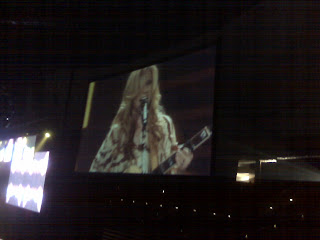 My favorite Idol contestant, Brooke White, performed exactly as you would expect, right down to coming onstage in bare feet. My wife got her fix of Michael Johns and my mother-in-law just enjoyed the music. My wife, daughter and I agreed that we actually knew every song that was performed in the show, and that made it easy to enjoy.
The headliner was the 2008 winner, David Cook, who finished off the evening with a rock vibe. 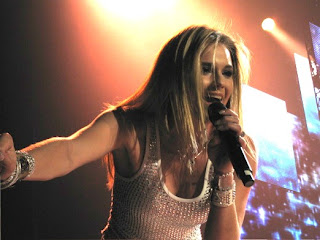 The biggest surprise of the night for me was Kristi Lee Cook. I had noticed her on the show, but in person she is just stunning. With her amazing looks and a little more work on her vocals, she has the potential to be a real star, I think.
My daughter may be up all night. She was just babbling. My favorite line came moments after she returned from her close encounter with her "fiance." She said, "I had to elbow my way past a bunch of ten-year-olds."
Now, I guess we have a wedding to plan.