What Would Tom Hanks Have to Say?

In honor of this weekend's ativities, we reach back into the Daddy D archives. This was a contribution in May of 2005 to a now-defunct faith-based publication...

“A League of Their Own.” Hanks’ character manages a women’s baseball team. One of his players becomes upset and the manager is incredulous. “Are you crying? There’s no crying in baseball!” Maybe not, but there is crying in softball. I’ve discovered that, to my delight, this spring.
Coaching youth sports can be challenging and remarkably rewarding. I’ve had the opportunity to coach mixed soccer teams and boys’ baseball teams. Now, I’m having my first experience working with all girls, teenage girls. One of my neighbors has been coaching his daughter’s softball team for several years. Our girls are the same age and they’ve developed a close friendship. There was a spot open on the team this season, and we happily signed up. I was excited about it for all the usual reasons: new social opportunities for my daughter, a chance for her to build confidence, all that. I did not expect to take an active role in coaching the team. That seems to have happened, though and it is working out well.
My neighbor said he falls in love with the girls every spring and I’m beginning to understand why. They consistently surprise you. Just when you think they’re just being little girls, they turn on some intensity valve. Just when you think they have that figured out, they seem more interested in how their uniform looks than whether they can make the play.. Just when you think they’re ready to give up, they’ll break out an organized cheer. It’s confusing sometimes, but also uplifting.
In a recent game, our pitcher took a line drive off her shin. She hung in there, fielded the ball, made the throw and got the out. Then, she fell to the ground and started to sob. She wasn’t hysterical, though. She was hurting. Her tears were genuine and that was obvious to everyone. Thirty minutes later, the swelling was so bad it looked like she had grown a third knee. Not long after that, we engaged in a spirited debate about whether it would be “cooler” to go to school on a crutch, or just limping. I told her she would earn more cool points by limping around, but telling people she made the play. I think that’s the strategy she went with. Next game, she was back out there without fear but not without tears. Why was she crying this time? Her dad wouldn’t let her roll down the waistband of her shorts. See what I’m talking about? 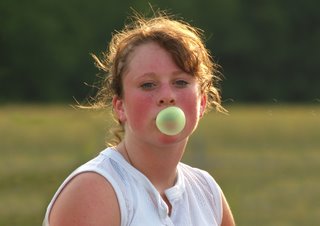 Coaching girls is just different. Praise and warmth are much more effective motivators than criticism and challenge. Sometimes, when you’re coaching boys you can get what you want from them by making them angry. I’m discovering if you make a young girl mad, more often than not the results are the opposite of what you had hoped and intended.
When things work well, you get back much more than you give. One of our players missed a game. When she showed up for the next one I asked her where she had been. She said “Bible study.” I said, “Well, that’s much more important but we missed you and we’re glad you’re back.” The smile I got was utterly priceless. I don’t know if they feel things more deeply than the average teenage boy, but they certainly express their feelings more openly. You always know where you stand with those girls.
We are also fortunate in that most of our players seem to come from families of faith. Each girl is assigned to lead a team prayer at some point while we are together. The willingness with which they accept the responsibility and the apparent respect for the process is heartening. 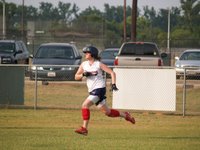 They are taking advantage of social opportunities, becoming better friends and gaining confidence. More importantly, they’re learning to respect one another’s faith and dignity. They are learning to appreciate o another’s talents and celebrate their differences. They can still be little girls, but can catch you off guard with their depth of character.
Yes, it’s just softball; but there’s a lot of hope on that team. There are great families raising outstanding young women, the kind of girls who are easy to love.