Dawn of the Local TV Dead

My broadcast past continues to haunt me like a zombie in a B-Movie. I've had another doggone Dialing For Thousands encounter. I arrived on time for a meeting at work, but the person I was scheduled to see called to say he was running a little late. I chose to use the unexpected free time to "chillax," as my daughter calls it. I went to the cafeteria to grab a Diet Coke and a moment of quiet. Instead, a nice man approached me and said, "My ex-wife's grandmother used to watch you every day." (The story varies like an urban legend, but there's almost always an elderly aunt or somebody's grandmother involved). 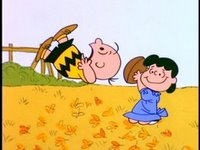 I'm like Charlie Brown with the football on this one. I always assume Aunt Bertie watched my sportscasts. I'm always wrong. Inevitably, a conversation which starts like this leads directly to a phone call, a practical joke and upset Auntie. Sure enough, his ex-wife's brother allegedly waited for me to appear on his television one night. He knew his grandmother would be watching. So, while I dialed the number to someone in Emerson, Arkansas or another obscure outpost in the Ark-La-Tex, he dialed Grandma's number. When she answered, he did his best to replicate my little presentation and got her worked up. Of course, they still tell this story at family gatherings.
The little viewer-interactive enterprise has been gone (but obviously not forgotten) for years, and yet it still stirs emotions. A version of this tale has been presented to me by countless strangers, along with stories of elderly relatives keeping careful daily logs of where I called and the results of those calls. I've had people send spiral notebooks to me which are filled with carefully kept notes, painstakingly spread upon the record of their lives, all over the fleeting possibility of winning cash in the low four figures. It astounded me when I was doing it. It astounds me more even today.
This is disturbing in a way because it leads to a feeling that I wasted a lot of time and energy. As a sportscaster, more often than not I reported on stories of success. A highlight is a high moment, something positive. The athletes we featured were selected to be profiled because of their achievements. Even with the scandals that sully sports today, the preponderance of reporting focuses on winners, people and moments of accomplishment.
All of that, twenty-five years as a sportscaster, seems forgotten now. Every interception, touchdown, home run, slam sunk, personal best time that was featured on our air has long since left the atmosphere and dissipated into nothingness. They occupy no space in anyone's grey matter, not even my own.
But Dialing for Thousands lives on.

There's a crip 100 dollar bill with your name on it.. if you'll call my dad and ask him for the count and direction.

Just kidding, (unless you actually will do it). I know it has to be hard to be remembered for that, but at the same time think of the thousands of people who know who you are.

Fame comes at a price.

Well, I guess it's better to to be remembered in infamy than completely forgotten to history.

Right now, I fear the thing I will be most remembered for here is helming one of the most infamously awful newscasts in anyone's memory.