Is That a Satellite Dish on Your Car?

A bit of a debate has ensued on another locally-oriented blog about the growth in popularity of satellite radio. One correspondent claims that a recent slide in ratings by local rock stations can be attributed to an increasing abundance of satellite receivers in cars. Another responds by saying he does not know anyone with satellite radio.
It’s interesting to watch this play out. My friend Jerry spent decades as a manager in local radio, and he periodically will send updates to me about the status of the satellite radio industry. He

seems to be among those who perceive it to be a blip, a minor annoyance. I see it quite differently.
My wife, my father and I all have satellite radio in our vehicles. We also listen to satellite radio 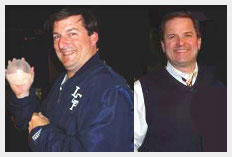 at the house. I do listen to local radio for specific things. I enjoy JJ and Bonzai in the afternoons. I also enjoy local news. It is not coincidental that I get those from the same station, KEEL, which is performing admirably in the local ratings. For music, I listen to XM 26, XM 46 and sometimes XM 72. My daughter moves manically between XM 20, XM21, XM 22 and XM 30. I’m sad to say that the local pop station, K 94.5, is usually her sixth option in the car. We have grown accustomed to commercial-free radio without a lot of jabbering. She is interested in the music exclusively.
The guys on the morning show at the local oldies station can be witty sometimes, and they have a credible news anchor on their show, so I will tune in to them sometimes in the morning.
I also have to support my man Fletcher wth his morning sports show.
Mostly, though, if I want talk, on XM I can choose between three sports networks, several news channels, and two or three comedy channels. There is no way the local stations can compete. In fact, I'm being less than honest if I don't admit that I listen to those specific local shows because I have personal relationships with most of the people on them. That doens't mean they're not successful, though.
I’ve spent a lot of time and poured a lot of my soul into local radio, and I continue to wish success for my friends, as well as everyone I don’t know in local radio. I believe they will thrive, because local is king. I just think they shouldn’t live in denial about where satellite radio is going and how it will impact the programming on their stations. The local rock stations, along with the Mix adult contemporary station are sliding in the ratings. It has nothing to do with the air personalities. It has a lot to do with how people choose to enjoy their music these days.
People much smarter than I are studying this carefully. They are looking for reasons to compel the listener to tune in. As my children grow with more and more options, radio stations are simply not a part of their lives as they were to the generation before them.
You can’t deny satellite radio, especially as receivers are becoming standard in many cars. If you know what to look for, drive through a parking lot and look for satellite antennas. I suspect there are more than you think.
As for the person who claims he doesn’t know anyone with satellite radio, I guess it’s all about the circles you run in. Aside from the three receivers in my immediate family, I can think of at least four people I encounter on a daily basis at work who have satellite radio in their cars.
It’s here, and it’s growing. For people inside the business to deny it is foolhardy.

Local radio has been in decline for years, and I believe it is well on its way towards a painful death.

I don't have satellite, but I stopped listening to commercial radio about 10 years ago. Too many ads, and crappy programming.

I was nudged to the non-commercial side by living in a city with one of the best public radio stations on earth, KCRW. Great mix of music and news.

Once I moved from LA, it's been all about the podcasts. Don't need radio anymore.