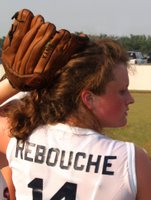 Moreauville, LA (July 14, 2006) – Another weekend has meant another trip to an obscure location. The Louisiana Little League girls state softball tournament somehow wound up in Avoyelles Parish.
I’ve driven through this parish on the interstate countless times, but this is the first time I’ve been compelled to set foot on Avoyelles soil. This is sad, in its own way, because it is my father’s home parish. In fact, he grew up just nine miles north of Moreauville in Marksville. Yes, if you cut me, I bleed Avoyelles parish blood. It happened tonight, figuratively speaking.
Our team lost in extra innings to a team from West Ouachita. There was a huge moment in the sixth inning. We were trailing by a run, but the lead-off hitters bunted their way to the corners. My daughter came up to bat. She took a couple of pitches then smoked a screaming line drive. It was the hardest I’ve ever seen her hit a ball. Unfortunately, it rocketed directly into the glove of the West Ouachita shortstop. The ball was struck so sharply that the runner on third, who was breaking with the pitch, had no shot to get back to the base. The runner from first tried to scramble back to the bag, but the Ouachita girls alertly threw over there. Yes, my daughter hit into a rally-crushing, inning-ending triple play. The public address announcer said, “That’s something you don’t see very often: A triple play!” Thanks, buddy.

The people here were very nice. This is situated far enough south in the state so that the Cajun accent is prominent. I know it well. It’s my father’s accent. The tournament host must not get to the northern part of the state much. While he proved to be adept and calling attention to the rare triple killing, he did not know how to pronounce the name of the home parish of our opponents. For the record, it’s “Washitah.” Apparently, the nice Cajun man thought there was an apostrophe in there somewhere. He kept calling them “West O’Washita.” At first, I thought it was a dialect thing, but then I realized he was doing it on purpose and it became hysterically funny. I guess he thought they were from the part of Louisiana settled by the Irish.
At one point in the evening, it took me about fifteen minutes just to visit the restroom. There was a little boy, about two and a half years old, in the men’s room. He didn’t lock the door behind him. I walked in on him, and said, “Oh, sorry buddy.” Too late: he was scared and starting calling Mommy. She went in to help him, but pulled a bonehead Mommy move. The kid had to sit to do his business, if you know what I’m saying. Mommy told him to hurry. She obviously doesn’t know much about boys and their bowels. Of course, her urging had the opposite effect than what she had hoped. Meanwhile, in the ladies’ room, someone was getting a spanking. There was crying coming from behind one door, accompanied by disquieting thwacking. Grunting and cajoling was coming from behind another door. Can’t a guy empty his bladder in peace? After all that, little Josh in the men’s room clogged up the toilet with tissue and his mom had to hunt down a plunger. Fun at the ballpark. 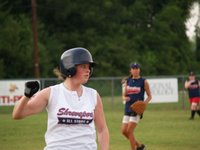 The girls recovered quickly from their disappointing loss. This is a double elimination tournament, so they live to play another day. The line of the night was uttered at the post-game pizza party. One of the girls went to the salad bar and got a bowl full of bacon bits. (Okay, it was my daughter). She was spooning the bacon bits onto a slice of pizza. I said “that’s weird.” She said, “Hey, they do it in Canada.” You have to think about it for a moment. The other girls giggled so much, I thought they’d pee their pants.
It’s a good thing Josh and his Mommy weren’t around.