No Tundra Was Harmed 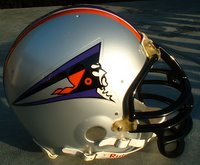 I saw a man wearing a Shreveport Pirates T-Shirt. Wow. It’s been eleven years since the Canadian Football League abandoned its United States experiment. Sure, the Pirates’ two seasons at Independence Stadium were often tumultuous. For those of us who were involved with the team on a daily basis, the memories evoke smiles and laughter.
The team played in Shreveport for two seasons and had records of 3-15 and 5-13. Thirty-six regular season games produced just eight victories, but a bushel basket of hysterical recollections.
In the team’s first season, 1994, they were terrible. The Pirates had won just two games as the anticipation built for the season finale. The game was against the Ottawa Rough Riders, the 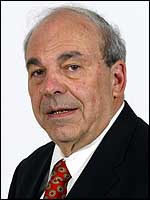 team against which the Pirates had opened the season. The team’s owner, Bernie Glieberman, had owned the franchise in Ottawa in the recent past. The game was to be on national TV in Canada, on that country’s equivalent of ESPN. Fuel was added to the fire when the play-by-play man assigned to the game by the network said that the Ottawa coach would “rather gnaw off his own fingers than lose to Shreveport.” That got enormous play in the local media, and, well, them was fightin’ words. More than 32,000 fans showed up for the game, and the Pirates won. The announcer was doing a live post-game show from the field, and he looked like he was about to refund his supper right there. It was one of the greatest nights in the history of sports in Shreveport. Take my word for it.

Bless Bernie. He tried to fit in. he owned a vintage car, a 1948 Tucker, which he loaned for display to a Classic Car museum in downtown Shreveport. When he and his team skipped town, the city planned to seize the vehicle and hold it until some bills were satisfied. Glieberman’s local attorney was dispatched to drive the car out of town, presumably to hide it. He ran out of gas and the cops nabbed the Tucker.
The team’s first training camp was put together hastily. The players were forced to stay in dorms at the state fairgrounds originally designed to house children who were showing livestock at the fair. A classic line fired off by a large young football player, upon seeing his accommodations for the first time: “What kind of country-a** sh*t is this?” That line, for a time, became something of a mantra in the local media. 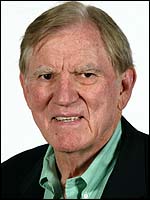 The shot of credibility this team had was the presence of its coach, NFL Hall of Famer Forrest Gregg. He didn’t win many football games, but he had everyone’s attention and respect.
A couple of more stories, just to illustrate how the two-year tenure of the Pirates could be a made-for-cable sitcom, if it’s done right. The Pirates had a punter named Aaron Kanner. He had been struggling a bit, and a member of the local media, who was working the sidelines of the game, decided to heckle him a little. (This was inappropriate and unprofessional, but it fit somehow). At one point in the game, Kanner was forced to punt from the back of his own end zone, and a decision had been made to take an intentional safety. Kanner simply could have fielded the snap and stepped out of the end zone, but no. He got the ball, wheeled, and punted a line-drive right at the startled and suddenly silent camera man.
Finally, there is the unforgettable scene from season two. The team owner, an aging northerner, standing in a steamy locker room following yet another loss by his team. He is surrounded by sweaty, naked young men and a couple of TV cameras when he launches into a profanity-laced, possibly alcohol-enhanced tirade. He is frustrated by his team’s lack of success on the field and in the stands, and he has found a culprit. “I don’t know where the &%$@ we’ll be next year, but I’m not going to any @#%^ing place that had G**Damned gambling boats!” After eleven years, that may not be a verbatim quote, but you get the idea. Needless to say, that tape has been played dozens of times, prompting, of course the question, “What kind of country a** sh*t is that?”

Amazing! I had no idea. This whole post was fascinating. Thanks, Darrell.