She's a Tiger, and I'm Long in the Tooth

Albany, Georgia (July 8, 2006) – My travels this spring and summer have taught me something about generic America. Wherever you wake up, you can usually find something that feels familiar, usually in the form of food: McDonald’s, Waffle House, Hooters, etc. Until recently, I haven’t understood why travelers go to these places. It seems to me that if you’re visiting a place, you should try to experience something about it that sets it apart.* Now, I’ve fallen into the trap of trying find something routine on the road. That’s the difference between travel for fun and travel for work, I suppose.
The people I’m with on these trips know what they like. I can tell you before I leave, without having to ask, where at least two of my meals will be: Hooters and Golden Corral. Even in Albany, Georgia (population 76,000 and shrinking), I can count on that.
You know you’ve fallen into some kind of eerie routine when a significant component of your dinner conversation involves comparing the Hooters you’re presently patronizing to others. For the record, Albany’s falls somewhere on the low end of the percentiles. The service was poor, the seating was uncomfortable, and the waitresses didn’t resemble the ones on the billboards. Get the picture?
How low did this conversation go? The manager stopped by to rub our shoulders, as Hooters women will occasionally do. I don’t ask. I just roll with it. The woman’s name, unfortunately, was Kat. You can imagine where things went from there. Just think of other things you might call a cat (Kat?) and move on. Anyhow, at one point, she said, “I’m a Tiger!” and growled a little while swiping a paw in our general direction. Apparently, I put my face in my hands. Kat said, “I’m sorry. Did I embarrass you?” I said, “No. You didn’t.” I was, of course, embarrassed for HER, but she didn’t realize it and I suppose that’s a good thing.

After that intellectually stimulating experience, I found my way to the local multiplex and watched “Click,” starring Adam Sandler. I enjoyed it very much. It wasn’t what I expected. Random thoughts: I had not noticed before how beautiful Kate Beckinsale is. I can’t explain why. It was nice to see Julie Kavner get work.** I always liked her on TV as Rhoda’s sister. (A Mary Tyler Moore Show spin-off). The thing that stayed with me as I left the theater, though, was not the movie’s “It’s A Wonderful Life” type message. It was that Henry Winkler played a grandfather.
So, if I take one thing away from South Georgia, it’s this: I’m getting old. I’m embarrassed by low-brow overt sexual references offered by a young woman in a futile attempt to ingratiate herself to middle-aged men. I remember Rhoda, and Fonzie is a grandpa. I’ll start my Metamucil regimen now so I can be regular when I get back home.

*I got breakfast at Steak -n- Shake, which we don't have at home. So, I've grown culturally, just a little. 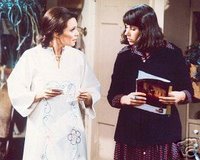 **To add to the notion that I'm hopelessly aging and out of touch, I didn't realize until I was writing this that Julie Kavner has had steady work for a long time as a character on The Simpsons. To me, she's Rhoda's sister. See what I mean?