As we have established, hair has been an issue for me for a long time. As a teenager, I had a long, wiry head of hair that drove my father crazy. It was the 70’s, and big, bushy hair was socially acceptable. I loved the way my hair felt in the back, even though I never was particularly happy with the way it looked. I promised myself at the time that, if I had a son, he could do whatever he wanted with his hair. I’m trying to keep that promise, but it’s a challenge.
When my son was wrapping up his church school career two and a half years ago, the administration there starting leaning on him about his hair. Believe me, it wasn’t that long. 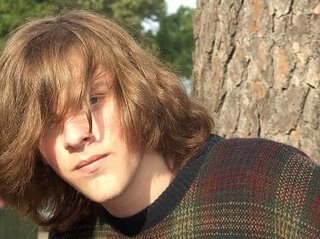 Nonetheless, in the spring of 2004, he was told that unless he cut his hair he would not be allowed to participate in graduation activities. He cut his hair. At the risk of being indelicate, the best way to put this is: he’s still pissed off about it. He vowed not to get his hair cut for one year. In keeping with my promise, he was allowed to do it. I didn’t think he would, but he did. In fact, he went almost a year and a half without seeing a set of shears. I didn’t like it one bit, but he was standing on principle and I was standing on a promise.
Finally, he had enough and got his hair cut to shoulder-length. He didn’t like it. He went back to the same place and got more cut off. He didn’t like it. He went back, three times in the same day and finally settled on a reasonable cut. He hasn’t had it cut since, and he’s looking raggedy. I’m urging him to get another cut before school starts, but I’m not forcing him. I’m keeping the promise, but it’s not easy. I want him to feel good about himself. If his hair gives him some kind of Samson-like self-confidence, then so be it.
I don’t have to like it, bit it is his hair. I fought hard for his right to have his hair as he wanted it when he was in 8th grade. I talked to the middle school coordinator, the school chaplain and the teacher who was driving the haircut train until I worked myself up into a state. We did not win the fight. To this day, I maintain that the length of his hair was one of the most superficial things to worry about and a colossal waste of time. Why, in the 21st century, are there arbitrary rules about the length of boys’ hair but none whatsoever about girls’? There was no answer to that question, but they refused to think beyond the school handbook. If they had just shut the hell up for three more weeks, the problem would have solved itself. But, no, they had to blindly and blithely spout their rules and send my son spinning into a tempest that still has him dizzy.
I truly believe I wouldn’t be fighting this hair battle today if the people at that school had just been reasonable. My wife and I were heavily involved in the school and the church for more than a decade when all this came up. That they refused to defer to the judgment of a student’s parents just mystifies and galls me. I appealed to their sense of reason, to their compassion and even to their own promises. They promised to treat each child as an individual; but they didn’t do it. They clung with white knuckles to their cookie-cutter rules, which is inconsistent at best with what they said they would do.
I loved that place. I poured my money, my heart and my soul into it, and I believe to this day that it let me down. My son’s hair is a symbol of what I perceive to be the school’s failure to be responsive to those who support it and nurture it. We got my daughter out of there and she blossomed in another environment.
I still love the place, and the rules people can thrive there. When it comes to my son’s haircut, it really doesn’t matter. The length of his hair will not affect his ability to get into a good college. Down the road, it may affect his ability to get a decent job. He can get it cut then. My hair has mostly fallen out, and I’ve said to him on more than one occasion, “Son, grow it while you’ve got it.” I know some people judge him harshly based upon the look he has chosen. He’s a kid and he’s feeling his way through life. His hair is part of who he is, and presently it’s helping define him.
Do I want him to get a hair cut? Certainly. Will I force him to cut it? Never. It’s his hair, not mine, not the school’s. I just want him to come to the conclusion on his own terms and in his own time that a nice haircut likely will serve his interests in a positive way. In the meantime, the people at school can feel good about themselves for taking a stand on something so vital.

I admire you so much for letting him keep his hair the way he wants it!
It's almost as if the school was saying you weren't doing your job as a parent..

it's just hair people! My parents are a little on the wild side, so we were able to do whatever we wanted to express ourselves. We all grew out of the strange clothes, and hair, so will he.

Even then, it doesn't look that bad..

yes it does, cut the hair and be a parent.