Raise Your Fist and Pray 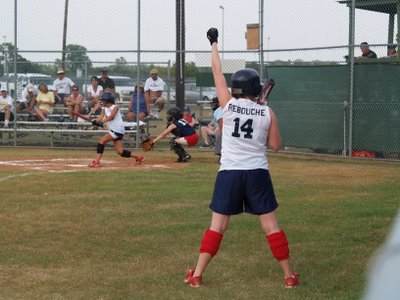 (Alexandria, LA) July 15, 2006 – Anyone old enough to remember the 1968 Mexico City Olympics will appreciate this photo. Of course, my daughter never heard of Tommie Smith and John Carlos, but there she was, at an athletic event, raising a fist wrapped in a black glove. Smith and Carlos were kicked out of the Games after this medal ceremony. Their silent protest with a “black power” salute was perceived as "not in keeping with the spirit of the Olympics." The way this trip is going, maybe we should organize a “girl power” demonstration.

Last night, the difference maker in our extra-innings loss to West Ouachita was a triple play started by my daughter’s bat. The girl who was the victim of the third out had a much worse day. Earlier, she locked her mother’s car keys in the trunk. Even though both parents are here, no one had a spare key. A lot of the team’s equipment and all paperwork were in that trunk. Until a locksmith came along, we had issues. During the game, the same girl was involved in a collision at the plate and took an elbow to the ribs.
Another girl showed up with a 101 degree fever. Another woke up this morning with an ear infection. Of course, the one girl with no parent on the trip is the one who needs to see a doctor. Of course, no one thought to get any kind of pre-authorization for treatment. The good news: our catcher’s dad is a physician. The bad news: He’s a gynecologist. So, I’m not sure how that will help the ear infection.
Our pitcher from last night, who went eight innings, is walking around like a zombie and limping. Why did our pitcher go the distance? Because our other pitchers are at summer camp. One is in east Texas. Another is in southwest Arkansas. Another player is in Florida with her family. Those girls apparently are high-tailin’ it to central Louisiana like the cavalry or something. We need them. We’re sick and wounded. We played with exactly nine girls and got into extra innings.
Let’s list what we have here: Tears, fever, ear infection, keys in trunk, ice packs, hot packs, and feminine hygiene products. I haven’t mentioned mosquito bites, abrasions on the girl who forgot to pack her sliding pants, and who knows what coming from the cesspool of pathogens that summer camp can be.
Girl power, indeed.