Buzz It or Beat It? Tough Chair Choices

My hair has always caused me problems. The latest edition of “Struggles With Hair” has less to do with what’s on my head (a pitiful remnant of a formerly densely populated follicular region) than it does with a peculiarly awkward circumstance surrounding its maintenance.
Several years ago, I abandoned the pretense of going to a “stylist” to get my hair cut. It wasn’t because I was ready to surrender emotionally to middle age. It was because I was so busy I had trouble keeping appointments. When I want a haircut, I want a haircut and I don’t want to wait 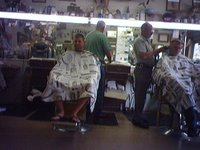 a week and a half to get one. There is an old-school barbershop near my house.* It has a barber pole, a shoe shine man, witch hazel, hot shaving foam and straight razors. There are older men in white shirts with combs in their breast pockets standing behind barber chairs, just waiting for new heads to arrive. Arrive, they do. Rarely can you walk in and go straight to a barber, but the wait is rarely longer than fifteen minutes. There’s plenty of seating, some reasonably current magazines to read and a 70’s-era television with rabbit ears to keep you distracted. There’s almost always someone else waiting and the conversation inevitably turns to the weather, LSU football or some other easily discerned common denominator. The small talk is collegial and cordial. All of these factors combine to create a relatively pleasant half-hour diversion in your day.
I’ve run into a problem, though, which is causing me to pause before I return. I’m uncomfortable with the guy who most often cuts my hair. Here’s how the thing works at this barber shop: You walk in, and there are four barbers there. Most of the fellas wait and hop into the first available chair. The way things have fallen, I’ve wound up most often in the third chair from the left. The barber who works that chair has a close-cropped buzz cut and apparently is dead-set on doing his part to have the world conform to his look. About four haircuts ago, I came out of his chair looking like a dusty cue ball. My wife was not pleased and my kids snickered.
Some kind of unspoken arrangement seems to have ensued. While I’ve been to every barber in the place, this man now seems to perceive me as his client. If two chairs are open, there is a presumption in the shop that I’ll be sitting in his. You can see the body language of the other barbers saying, “Well, Darrell’s going over there. I’ll wait for the next guy.” The last time I was there, Buzzman said, “Well, I know not to cut your hair too short.” Then, he started talking instead of paying attention to what he was doing. Sure enough, my head looked something like the greens at the U.S. Open. Now, my wife has forbidden me to have my hair cut by him again.
So, I don’t know what I’m supposed to do. There are three other barbers in that shop who cut my hair just like I want it. Do I dare walk in and snub Mr. Buzz? Do I explain to him that he’s been given at least three cautions about cutting my hair too short and I’m moving two chairs down the line?

Do I avoid going in there altogether? I feel like I’m trapped in the middle of a Seinfeld episode.
When I was single and actually had hair worth managing, I would choose where to get my hair cut by going to the salon that had the most attractive female stylists. After I got married, I went for years to the nice lady near my neighborhood who proved adept at getting my wispy remnants to look relatively full as they stood valiantly on top of my head. Now, I just want the process to be quick and comfortable. No matter what I choose to do, there will be awkwardness. You don’t want that in a haircut experience. Having bad hair is awkward enough.

*Photo stolen from Will Clarke

I had no idea how important a guy's hair was until I got married. Since you guys can't change your look too much, one wrong hair cut, and you are doomed for 6-8 weeks.

I do have to say it's the sexiest thing when my husband gets a new hair cut and it all falls right into place.