(Los Angeles) - I am not often star struck, but I admit I lost my composure a little bit this afternoon at the TCU Rose Bowl pep rally. I was standing around outside the Staples Center just taking it all in, when I saw a man standing on a planter, rising above the crowd. It was CBS News living legend Bob Schieffer, host of “Face the Nation,” former anchor of the CBS Evening News and TCU alumnus. 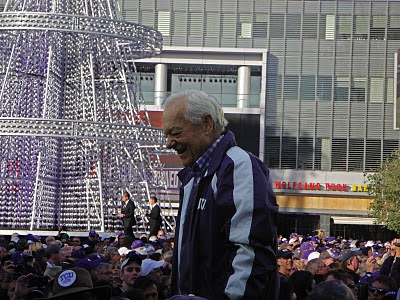 How large a figure is Mr. Schieffer at TCU? The journalism school there is the Schieffer School of Journalism. He’s an icon.
For me, it was like seeing one of the Beatles in the 60’s or something. I lost my mind and made a bee line for him. “Mr. Schieffer, would mind if I take a photo with you?” I have been told more than once to be careful if you meet your heroes because they can disappoint you. Not Schieff! He smiled and said “Certainly.” He let me tell him my little story about how I spent a lifetime working in local news and I thanked him enthusiastically. What a highlight for me! 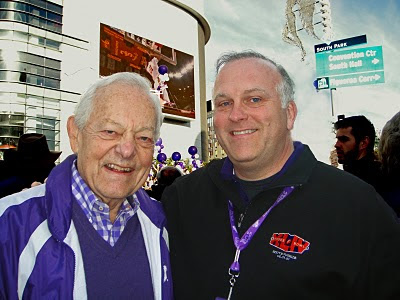 It’s been a strange, “local news” couple of days. 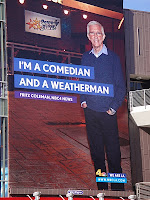 For example, there’s Fritz Coleman. According to the enormous billboard hovering over Hollywood Avenue, he’s a comedian and he’s a weatherman. I’m guessing if you live in southern California, Mr. Coleman is a celebrity. He’s certainly on the local news and apparently he’s a comedian. And a weatherman. And….He’s in an out-of-focus photo with my wife and me! 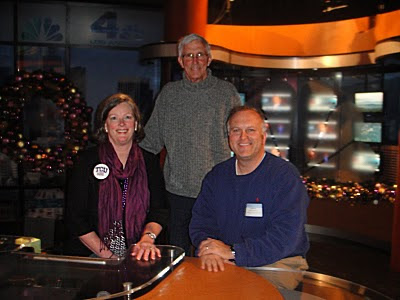 We underappreciated it at the moment, but grasped it a little more when we saw the billboard.

Meanwhile, back at the pep rally, where a sea of purple flooded Nokia Plaza… 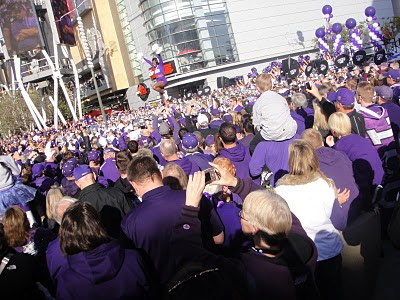 We were minding our own business standing under a statue of Magic Johnson when we saw a familiar face: Gerry May, the anchor at the ABC station back home in Shreveport. He is a huge TCU fan and I knew he would be here, but to be standing within 30 feet of him and his wife was just a crazy coincidence. So, of course we posed for photos. 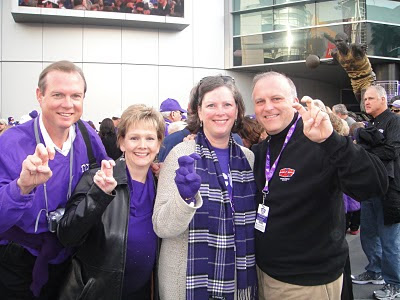 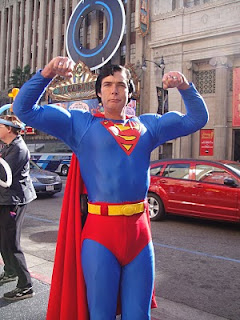 I know, I know…when you’re in Hollywood, these are not the kinds of celebrities you expect to see. Movie stars, TV stars; who knows you will see? How about The Man of Steel?
I’m still recovering from my close encounter with network news royalty. I need to try to get the stars out of my eyes. Seeing Schieffer was, with respect to my composure, was like being exposed to kryptonite.