(Hollywood, CA) – We hit Hollywood Boulevard this morning and saw the things you’re supposed to see when you’re in Hollywood. Like the sign. You know a sign is something special when there are signs giving you directions to the sign. Fortunately, we didn’t need directions, because this is what you see from our hotel. 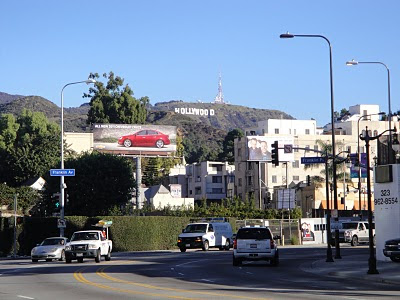 Other things we saw: Badgers. 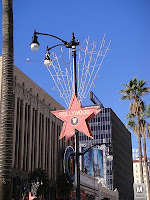 Yes, Wisconsin fans found their way to Hollywood, finally. Some of them are trying to taunt purple-clad TCU faithful, but the Frogs aren’t taking the bait. Not only are Frog fans nice by nature, they also remember that their team got crushed in the Fiesta Bowl last year. So, there’s not much smack talk out on the streets, no matter how hard a bellicose Badger may try to start some.
As we made our way down the Walk of Stars, dead center in front of the legendary Grauman’s Chinese theater: Shreveport people! TCU parents who have a daughter the same age as ours, who we’ve known for more than fifteen years. We were thrilled to see one another. They expressed similar sentiments about wandering around feeling a little lost, not really knowing anybody. I started a sentence, “If we were on an LSU trip….” And he finished it: “…we’d know a hundred people.” Yep, I know just how you feel. 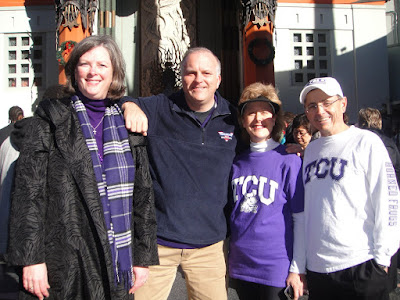