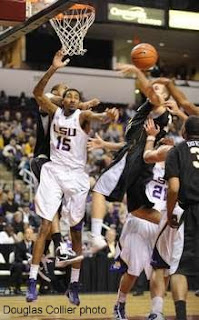 There was a time not so long ago that anything that even resembled a legitimate sporting event in town was circled in red on my calendar. I would anticipate it for days, exhort people to attend even get a little frustrated or angry if they had no interest. I wanted so badly to live in an engaged, legitimate sports city.
I guess I’ve surrendered or something. I got a late-afternoon text message from a co-worker asking, “Hey, isn’t the the LSU basketball game tonight?” I answered, “Um, is it? Maybe. Yeah.” It turns out the rare North Louisiana LSU appearance was just a couple of hours away. I had to talk myself and, somewhat more challenging, my wife into driving across the river to go to the game. I suppose everything you need to know about it can be summed up by this: We bought tickets about five minutes before tip-off and scored these seats. 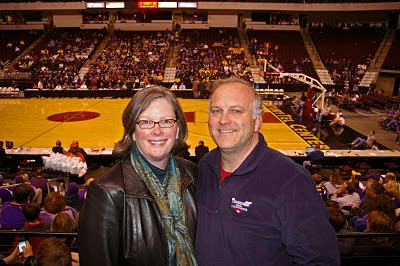 Ultimately, I said to her, “If I don’t go to that game, I will feel like a huge hypocrite.” So, to the arena we went and we really had a good time. The game was entertaining. LSU’s opponent, Wichita State, hit a big three-pointer with seven seconds left to win by a point. 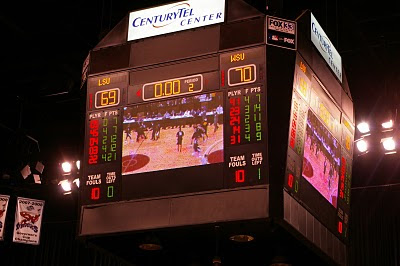 The crowd, though somewhat small, was enthusiastic. We won a $50.00 gift certificate from LSU’s on-line sports shop, so if you add up the cost of tickets, concessions and gasoline we just about broke even on the evening.
We are well acquainted with a number of current LSU students, all of whom are home for the holidays and none of whom attended the game. That confuses and slightly saddens me. But since I had to convince myself to go, I guess it’s best if I keep my mouth shut about that. Nobody like a holiday hypocrite.