Nick Saban is a Rock Star 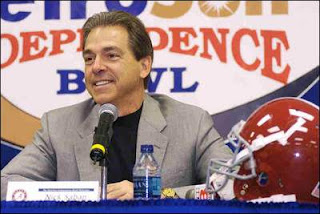 For a season or more, football fans in Louisiana have been pretending to hate Nick Saban; but actions speak louder than words. Saban is spending a few days in the state with his University of Alabama football team. The Crimson Tide will play Colorado in the Independence Bowl, and the Buffaloes have essentially been an afterthought. There are plenty of reasons to keep up the "Hate Nick" charade: he left LSU and he now coaches Alabama. There was a two-year gap between those circumstances, but none of that matters.
I had a chance to chat briefly with him one-on-one on Friday. He was polite to me and to everyone he encountered. He patiently signed autographs and posed for pictures. While a line formed to get a piece of Saban, Colorado Coach What's-His-Name was essentially ignored. I watched Saban carefully. He discreetly looked for an opportunity to exit, found it, caught the eye of a nearby Alabama state trooper and made a bee line for the back door. He left without incident and no one said an unkind word to him or about him.
A lot of local fans are planning to wear LSU colors to the Colorado-Alabama game. While that may make no sense, it lets them feel good about themselves. It also girds them for their intention to boo Saban. But, they will be stuck in a conundrum. They don't really want him to lose, because an Alabama win will make LSU and the rest of the Southeastern Conference look better. Plus, if Alabama's good, it's easier to pretend to hate Saban a while longer. Also, Crimson-clad fans around town outnumber their conterparts by about 1000-1. Considering this is the second year in a row Alabama has played in the Independence Bowl, that's pretty impressive. 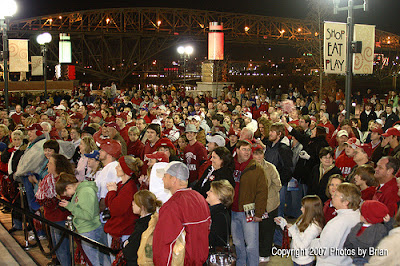 (Thanks to Photos By Brian for the image.)
-----------------------------------------------------
Daddy D Note: I, among many others, shared the head table with Saban at a bowl event. My employer funds two community service scholarships for high school seniors and I had the honor of presenting them to the deserving recipients. The young lady in this photo is bound for LSU. The other (not pictured) is going to Yale. I'm not sure if I'm flattered or disturbed that the mayor (in the top right corner of the photo, seated next to his wife and a prominent Baptist preacher) seems to be paying attention. 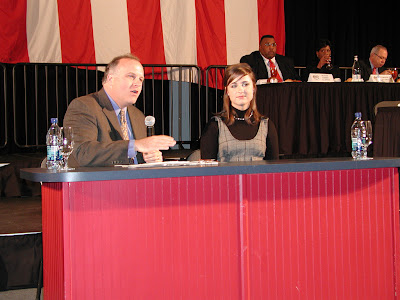 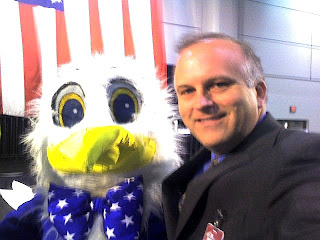