My wife and I have kidded for years (well, actually...decades now) that we are in a "worlds collide" relationship. I am the product of an old Cajun and a country girl. The closest my wife has come to the country is The Club for Sunday brunch after church.
I still haven't figured out how I was even allowed into the house the first time I met her family. The parents and the grandparents were together that evening. God as my witness, we were going to a party honoring debutantes. 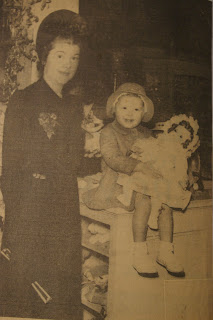 The disparity of our upbringing reached out and grabbed me recently as we thumbed through some old scrapbooks. As far back as the 1930's, my in-laws were appearing on the society pages of the local paper. This is my mother-in-law as a baby, with her mother. Reading the caption, I can discern no specific reason for them to be in the paper, except that there was a perception that the public was interested in seeing photos of society types dressed up for various seasonal occasions.
That was just the beginning. For a couple of generations, my wife and her people appeared posing in the paper. 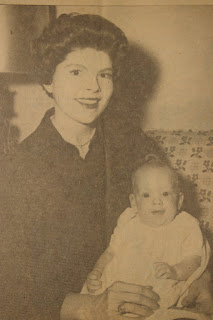 Fast forward to the 60's, and there's my wife with her mother in an eerily similar photograph. The caption which accompanies this moment of loveliness alerted riveted readers that my father-in-law and his bride had recently moved back to town from Dallas and had reproduced. Don't get me wrong...I'm happy they did, because this little girl would grow up to be my wife. I'm just not sure why it was in the paper. Did they have a press agent, or what? The future in-laws met at Southern Methodist University and after graduation they moved to her childhood home, which the paper proudly proclaimed. My parents probably never heard of SMU. Ask them what it stands for, they'd probably say "Some Messy Underwear." But, I digress.
As she grew, the young Future Mother of My Children straddled a giant graphic Easter egg in another published photoillustration. This took up a full page of newsprint and was accompanied by a short essay about why children love Easter. 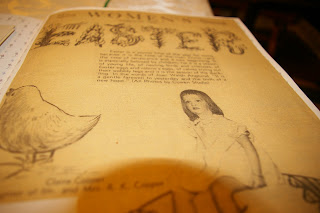 Years later, in the spirit of Christmas and Equal Time, my future wife appeared with her baby sister in a photograph which was used to extoll the joys of the Holiday Season. 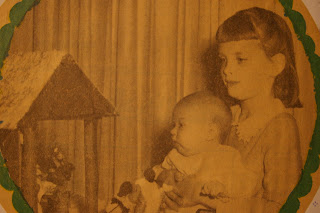 I don't remember anyone from my immediate family appearing in the newspaper. That's probably a good thing, because it means we mostly stayed out of trouble. My wife did not continue the tradition with our daughter, and we've never discussed it. Maybe she should take it up with her mother's agent.