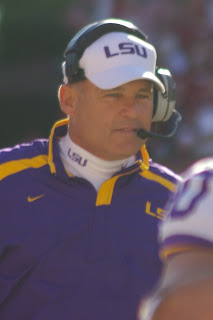 Will he stay or will he go? The central question surrounding LSU football coach Les Miles has been a remarkable distraction during the dark days fans experience between the end of the season and the bowl games.
Miles’ game of footsie with the University of Michigan has kept LSU fans lathered up, whether they wanted him to hang his hat in Baton Rouge for a while longer or if they were willing to help him pack. ESPN didn’t help matters much by reporting with certainty on the morning before the SEC championship game that Miles would be the Wolverines’ new head coach. That led to a hastily-called news conference during which Miles vehemently refuted the report. He said without equivocation that he would return to LSU, that he would be the Tigers’ coach next season. About a week later, Miles was reported to have had telephone conversations with Michigan’s decision-makers, leading to another statement reaffirming his intention to stay at LSU. 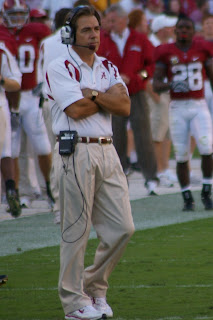 The by-product of all this uncertainty has been a cacophony of conjecture and internet message board clatter. There was word that Alabama coach Nick Saban was expressing strong interest in returning to LSU, assuming Miles left. Bobby Petrino, the coach of the NFL’s Atlanta Falcons who ultimately left to coach at the University of Arkansas, was said to be sniffing around Tigertown. Auburn’s Tommy Tuberville was said to be interested. The rumor mill was grinding at a record rate. All the while, those in the know were stomping their feet and turning purple proclaiming Miles’ desire to stay put.

All of this hand-wringing is made more interesting because not that long ago, some LSU fans were getting antsy. They wondered if Miles was the man who could lead them to where they wanted to be. For the second time this decade, LSU has made it to the national championship game, and you can’t do much better than that. When Saban coached the Tigers to a national title four years ago, many people thought that might be a once-in-a-generation achievement. 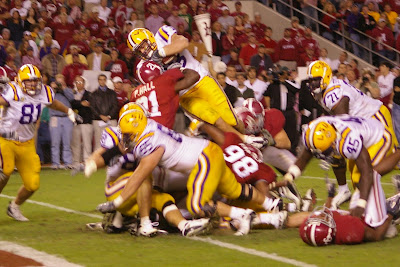 Certainly, Tiger faithful should hope that the program can sustain this caliber of play. Stability at the top certainly should help. Since Charles McClendon retired, the nameplate on the door to the coach’s office has been changed with disquieting regularity. Men like Bear Bryant, Eddie Robinson, Joe Paterno and Bobby Bowden are rare. They got head coaching jobs and kept them. Take a look at their success. Staying put had a whole lot to do with it. That’s what LSU fans should hope for: that Miles does indeed stick around for a long time.

For that to happen, people will need to learn patience, a virtue with which we seem to have lost touch. Every legendary coach has had “down” years when thing didn’t go his way. A football program with stability will nonetheless experience cycles. The presence of a superstar quarterback, for instance, may frighten away the next great recruit. Great coaches lead great programs which can recover from disappointing stretches. Allowing the coaches and the programs to be great requires a particular kind of discipline from administrators and fans. It also calls for a shepherd’s mentality. Sometimes, you have to keep the wolves (or the Wolverines) at bay.