(Miami) – For all the Saints who on this earth do dwell, there is unbridled joy. Nothing this side of The Rapture itself could elicit such euphoria. The New Orleans Saints are Super Bowl champions. 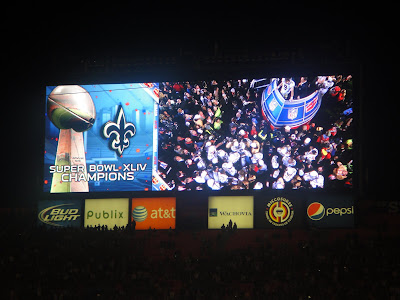 The team, in existence since 1967, rewarded its long-suffering fans with redemption and reward. Grown men wept with joy following the Saints’ tremendous come-from-behind 31-17 victory over the Indianapolis Colts.
What a transcendent event for New Orleans. Less than five years ago, the city itself was left for dead following Hurricane Katrina’s devastating landfall and the resulting floods. Now, instead of rancid water clogging the city’s consciousness, there is the freshness of life anew. The Saints are champions and they are carrying a region on their shoulders. 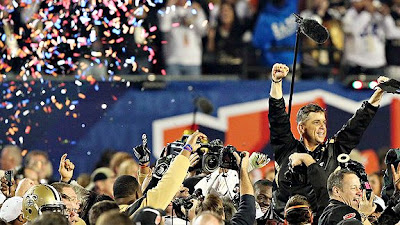 Cornerback Tracy Porter, who sealed the victory with a 74-yard 4th quarter interception for a touchdown, was reduced to understatement, saying simply “Words can’t describe what this means for New Orleans. I am a Louisiana native, and this is real big.” 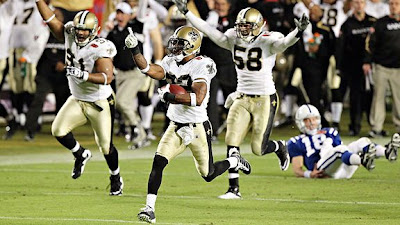 Louisiana football fans have kept the faith for more than forty years, wandering in an emotional wasteland, hoping for someone to lead them to this Promised Land. 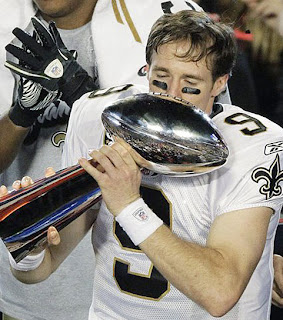 Head Coach Sean Payton and quarterback Drew Brees were up to the challenge, never losing faith in their abilities or the determination of those who supported them along the way.
Since September, Saints’ faithful have discussed “destiny” in a way only true believers can. If any fan base ever deserved a championship, it’s this one. Louisiana, so often derided for corruption in politics and socioeconomic shortcomings, is the home of the best football team in America, the Super Bowl Champions. 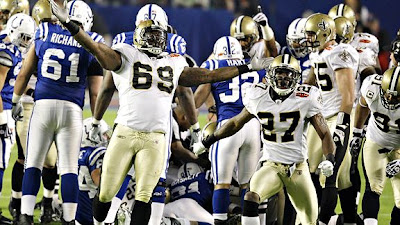 Professions of faith are coming from unlikely sources, like Saints tight end Jeremy Shockey, who said he had been praying “all day and all night” for this outcome.
The true impact of all this will not be realized for some time, but Louisianans have to believe. The Saints, an enduring symbol of futility for more than four decades, have emerged from the muck of mediocrity. Louisiana can do more than persevere, it can excel. If the Saints can do it, anyone can. Yes, a football team can inspire greatness, particularly this one. So much of New Orleans’ identity has been tied to the Saints: The “Who Dat?” cheer emerged from the unique accent that makes so many Crescent City natives instantly identifiable. During those losing seasons, all those losing seasons, fans mockingly hid their identities by covering their heads with paper bags. A city that is famous for its ability to host a party while turning a blind eye to rampant debauchery, in the view of some, was appropriately represented by a perennial loser. 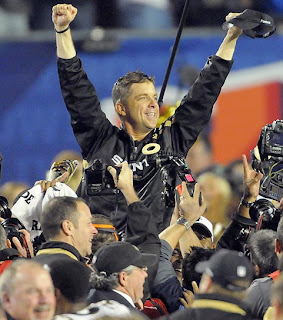 Now, deliverance is at hand. The Saints are redefined. The jubilation in the streets, businesses and homes all across the region is just beginning to resonate. Faith, belief, joy; Success, happiness, hope: all ideals modeled for us by saints throughout history. Finally, maybe the football team in New Orleans is appropriately named.
Now, resplendent in victory, the Saints rightfully claim a title, one that our state hasn’t earned until now: Champions.
---------------------------------------
Photo credits: US Presswire/Jeff Hanisch,Getty Images/Jed Jacobsohn, Associated Press/ Chuck Burton and Mark J. Terrell, and of course, Darrell Rebouche: 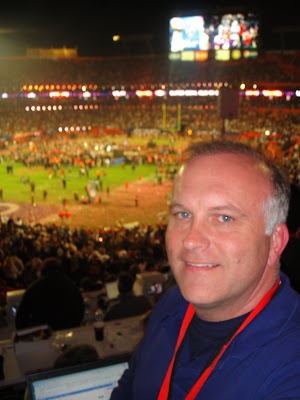