(Somewhere up in the air) - A 767 filled with Saints fans the day after their beloved team won the Super Bowl is a happy place. The faithful were wearing their black and gold gear, sporting smiles as wide as Lake Pontchartrain and still carrying signs. 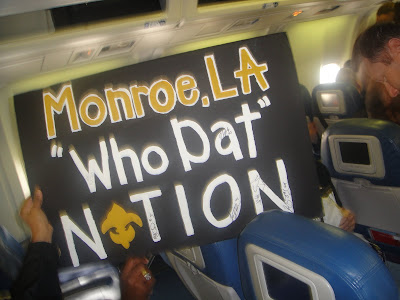 All corners of the state were represented. In addition to my seatmates from Monroe, I spoke to folks from Lafayette, Lake Charles, Shreveport, Hammond, Houma, Ruston and Pickering. Certainly the City of New Orleans filled its share of seats. 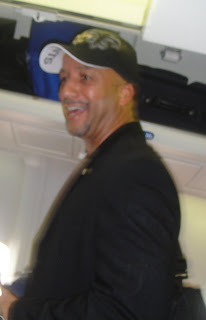 Saints cornerback Malcolm Jenkins was in first class, happily signing autographs. New Orleans Mayor Ray Nagin was leading "Who Dat?" cheers in coach. It was a party in the sky!
Despite all this star power, God help me, for a few moments I became the center of attention.You see, I am still suffering the emotional scars of having my roll-aboard taken from me and lost by the airline on the trip to Miami. This time, I made sure to board as early as I was allowed and stashed my precious bag into one of the overhead bins. People came along after me and put their things in there,too. After everyone was seated, I noticed the flight attendant couldn't close the door to the compartment. My bag was the obstruction. She said, "We will need to check this. It won't fit." I said, "Hold on a minute. This is the bag I always travel with. Trust me. It fits." She said, "Give it a try. I'll give you a couple of minutes."
I started shoving the bag back into the bin, then a wheel would pop out or a handle would snag. After a couple of minutes of wriggling it around, I snapped the door shut and it latched! To my shock and amazement, the people around me on the plane broke into a round of applause. They're ready to celebrate anything, it seems.
I turned and saw smiling eyes staring at me. Literally everyone in my view was wearing some kind of Saints paraphernalia. So, as the clapping subsided, I just raised my arms and said, "Who Dat?" In unison, they shouted back, "Who Dat!"
Caught up in the moment, I responded "Who Dat say dat bag won't fit?"
I got my laugh and took my seat.
I had hoped to bury myself in my book for a quiet trip home, but it was not to be. I was surrounded by chatter about the game. People are living it over and over again, and who can blame them? It's like they have to ask themselves time and again if their lifelong dreams of a Super Bowl championship have really come true.
True Dat, Who Dat.