Emotion Building On The Concourse 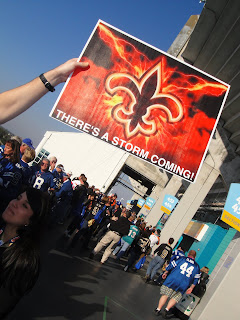 (Miami)-Saints fans are starting to pour into the stadium. I've seen a lot of football games, but rarely have I seen a collective consciousness like this. These people are ebullient. At the risk of overextending a Saints metaphor, it's like they've died and gone to Heaven. A communion of Saints, convinced at this moment that theirs is a team of destiny.
The quietly confident Colts fans are wandering around in Blue-clad packs, watching all this with wide-eyed wonder. 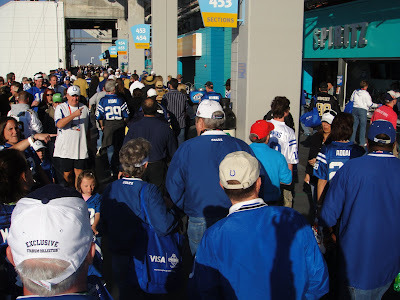 They are not calling attention to themselves at all. The Super Bowl experience is not new to them, whether their fandom is confined to the team's Indiana tenure or if it dates back to ancient Baltimore days.
In the two weeks since the Saints won the NFC championship, I have been envious of Saints fans' euphoria. I've been happy for them, but I just wasnt feeling it. 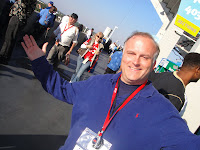 Now, as kickoff approaches, I have to admit my skin is tingling. There's tremendous excitement in the concourses, and soon it will all funnel into a giant south Florida bowl known as Sun Life Stadium. 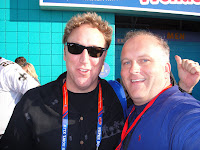 While wandering around the place, I ran into my friend Fletcher, known to loyal Daddy D readers as Frequent Traveling Companion. I hadn't seen his since, well...lunch. But it was good to see him, anyway.
The sign says a storm is coming. I can hear the thunder already.

Ah, Daddy D! I have never been around so much excitement around any sporting event as I see all around me here in Shreveport. My 13 yr old son, Neil, is with you at the game - you lucky dogs!!! Send more pics during the game! We will be watching for them.