A couple of decades ago, I went to a party where everyone except me was drinking. I watched people dance. Then, I declared to my wife, "If I look anything like that when I'm drinking and dancing, I'm not dancing any more." I've pretty much stuck to that, except for the obilgatory slow dance at a wedding or other such event. 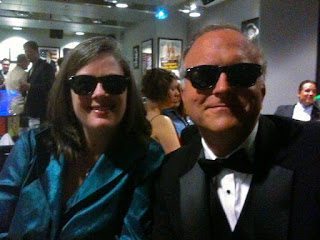 Last night, we got all dressed up and went to an awards ceremony at a downtown venue. A project I led last year was nominated and we had an inkling it might do well. So, being cool and all, we went diva on everybody.
With the possible exception of the moment my name was mentioned in conjunction with the project actually winning(!), the event was, shall we say, slow-paced.
So, I took to drinking rum and Coke.
Our group found a way to extricate itself from the proceedings with reasonable discretion, then made a decision to go find some live music. As it happened, someone we know who fronts a band was performing nearby. So, emboldened by my friend Captain Morgan, off we went.
Our friend the singer is very persuasive. From her spotlight, she demanded time and again that we dance. And so we did. I fast-danced to a Prince song. 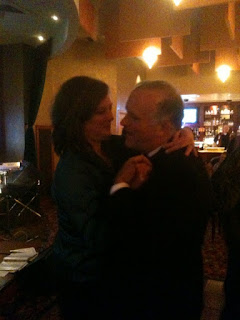 This was unheard of, a monumental event. There are photos, but I refuse to share them. Instead, there is a grainy cell phone photo of my wife putting me in a death grip during a slow dance. It was like she couldn't believe what she was seeing: me, dancing with her in public. She wanted to hang onto the moment with everything she had! And she should, because it might be a couple more decades before something like this happens again.
Or, who knows? It could happen again Friday night. You only live once. I guess you can dance.