A New Attitude, but Still No Luggage

(Ft. Lauderdale, FL) - How tired and frustrated was I when I arrived late last night? (Technically, early this morning). I met some friends somewhere down the highway for a beer and had no idea we were on the waterfront! To my amazement and bemusement, I learned this in a nice way when, after a few hours' sleep, I drove to that same spot looking for breakfast. Next door to the place where I oblivously decompressed hours earlier, I enjoyed a spectacular oceanside meal with this view. 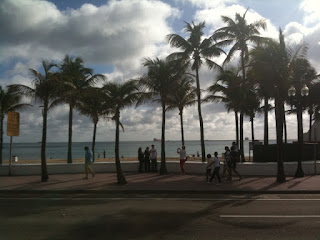 I ate alone and was happy about that. I really like being in control of my own movements. My phone has been ringing, though, and there are some festivities planned with my buddies later in the day. 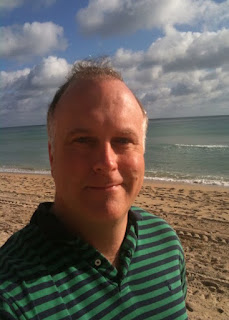 I took a moment to stroll along the beach, but since I still have no luggage I couldn't get my only clothes and shoes wet or sandy. That kind of limits the beach experience. That's okay, this is a football trip. The beach is just lagniappe.
I watched Saints fans stroll along the beach, basically thrilled to be here. Black and Gold-clad hordes have descended upon south Florida, most of them without tickets to the game. People are plotting party strategies, win or lose. It's remarkable to see.
Colts fans are sprinkled in among them, but they seem much more button-down and businesslike. They expect a Super Bowl championship and anything less will be a letdown. I even overheard one group talking about how they've been here all week, but they're flying back to Indianapolis to watch the game on television. Can you imagine a Saints fan doing that?
----------------
On the way out the door this morning, I ran into the islandic angel who washed my clothes for me. She was very kind. I discovered I shall not see her again, because she be off work until after I am gone. She improved my life just a little, though. The scenerey seemed so much nicer with clean socks and underwear. 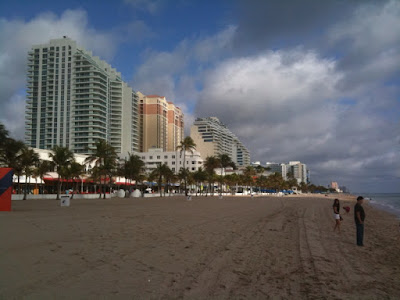