The holiday weekend was quiet in Daddy D Land. I owed a work buddy a huge favor and now we're even because I pulled his holiday weekend duty. Consequently, merriment was kept to a minimum. So, the leftovers come from the offspring.
My daughter was alernately awed and amused by a series of Wyoming wildlife encounters. I'm eagerly awaiting the product of a planned photo sharing party. 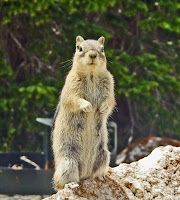 Certainly someone has an image or two of the herd of bucks they saw. True to her parenting, the daughter was quick with the shutter when the camera was handy. Gotta love the chipmunk! Hey, it's not a majestic beast roaming free in the mighty forest, but it's cute.
Our son's area of interest creates a significantly smaller geographical footprint. Somehow, he finagled a backstage VIP pass to a blues festival in east Texas. While he enjoyed the music immensely, he found himself fascinated by a seemingly unrelated activity taking place on the festival grounds. Tapping into his gregarious nature and his innate curiosity, he struck up a conversation with the Pleasant Hills Quilting Club. While he didn't come away with any kind of decorative bed covering, he was able to be a part of a priceless portrait. 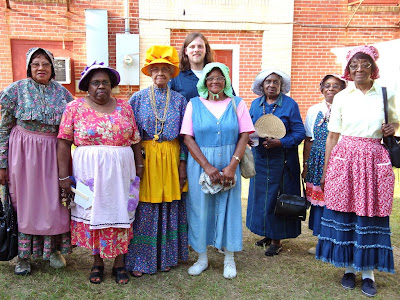 Some things just speak for themselves.