Big Fun in the River Cities

Despite having debutante blood coursing steadily through her septuagenarian veins, my sweet mother-in-law has become enamored with a somewhat proletariat pursuit: Arena Football. 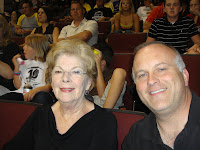 At her urging, we have attended several games this spring and summer. Fortunately, the local team is consistently winning.
Her unlikely devotion to a relatively obscure sport has now spanned two seasons. She has identified her favorite players. She reads previews, game stories and features about the team in the local sports page. Last weekend while we were out of town, she listened to a road game on the radio and e-mailed score updates to us. For the most recent game, the team's management urged fans to wear black. Of course, she complied and also went the extra mile, calling to make sure we would be appropriately attired.
Truly, this does not compute. The two seasons which have captivated her have been successful for the team. It has won its division championship and advanced to the playoffs both years, so she is something of a good luck charm for them.
During the most recent game, she received a true fan's christening. She snagged a keepsake during the cheerleader tee-shirt toss. 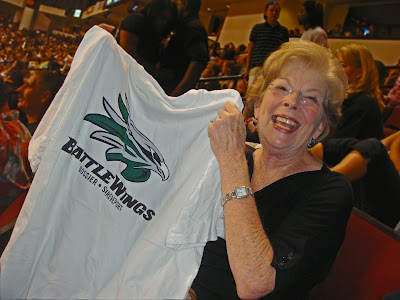 The look on her face was priceless, like she just found the perfect gown for the fall formal or something.
This is all a part of her "new normal" as a merry widow. We are thrilled she's having fun and are just grateful she's letting us tag along.