(Venice, LA) - Despite being a lifelong resident of Louisiana, until today I had never been to the southernmost part of the state. That's because it's the Mississippi River delta, which of course is mostly water with a little marshland thrown in to keep things interesting. Having never really been Mr. Outdoors, there's been no reason to make the trip. That has all changed. At the crack of dawn, I joined a group of guys on the water in a great manly quest for redfish and speckled trout. 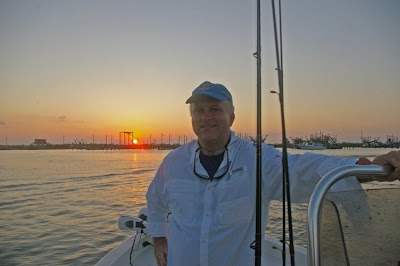 The effort was epic. To the dismay of my boy Andrew, who assembled the crew, the fish were not cooperating out there in the rivers, bays and bayous which dot the delta. Catfish were easy to come by but nobody wanted those.
This first weekend of summer has been true to its nature: stiflingly hot, almost oppressive. Things were going so slowly that a few of the fishing faithful were becoming discouraged.
Finally, blessfully, late in the day the redfish starting biting...for everyone except me. It was understood going into this trip that I know nothing about fishing. That was part of the plan.

Andrew feels a need to offer me the opportunity to participate in activiities which are traditional for the typical southern male. Hence, a weekend fishing trip.
I quickly learned that fishing at this level requires a combination of art, science, skill and luck. I have none of those. My companions were patient with me, occasionally amused by my angling ineptitude. Finally, perseverance paid off. I hooked a big redfish. 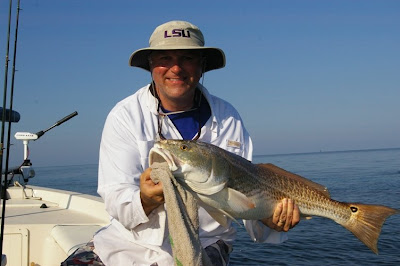 This was a huge moment because everybody else had already landed at least one really big fish.
Hungry, overheated and exhausted, we decided the time was right to set a course for dry land. Go out on top. For me, catching a fish was better than not catching one but I would have been okay if it hadn't happened for me. I had my camera along and this weekend adventure serves me much better as a giant photo op.

Some very good pictures - the one with the fish just doesn't compute! Really glad you got you one, honey. Stay safe out there, keep the sunscreen on, and hurry home.