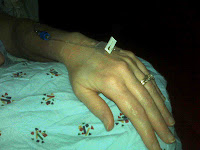 The lovely hand with the giant needle sticking out of it belongs to my wife, who is spending the second night in a row in a hospital.
We can all relate to a little trip to the emergency room, which may or may not lead to an overnight stay "just to be safe." However, two nights in the pokey gets your attention. I'll spare you the details (for everyone's sake, trust me) but suffice it to say we've known one another for 24 years and this is the most significant non-pregnancy related bout of sickness from her I can recall.
Early in day two of The Illness, friends and co-workers made good sport of things, many asking if she had contracted some kind of raccoon-related malady. "Was she foaming at the mouth?" was asked more than once. Yes, everybody's a comedian.
However, when news spread of the second-night holdover the tone of the comments changed.
We really appreciate all the expressions of support. She will be okay. She has to be, because if we get to three nights in the clink, Daddy D may become a quivering mass of flesh.
Our daughter, safely ensconced in the Rocky Mountains somewhere, is presumably blissfully unware of all this unpleasantness. That's okay; there's nothing to be overly concerned about. That doesn't stop her older brother from being utterly unsettled. At 19, he's never seen his mother like this. He doesn't know how to act. He has been dutifully visiting and that counts for a lot.
My mother-in-law is wearing a kind of wide-eyed expression. She fully expects this bout of gastrointestinal revolt won't have any sort of lasting impact, but it has to be taken seriously. The thing you learn as a family member of a hospitalized person is a profound feeling of helplessness.
There has been a consistent thread in the comments from kind folks who have taken the time over the last couple of days to communicate concern. Many times over, people who know my wife well have expressed some version of "well at least she's getting some rest." There's a lot of benefit in that. She won't force herself to slow down and take a breather. A couple of nights in the hospital should accomplish something.
The thing is, it's the hospital where she works! She may be flat on her back, but her eyes are wide open. Get well soon, everybody.

Darrell, tell Claire I hope she's up and at 'em in no time! For everyone's sake!

Here's hoping that your sweet bride comes home ASAP, and that she is back to 100% soon! We'll be praying for her AND you, Darrell!