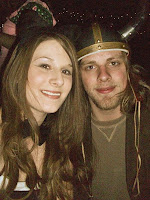 It's a big weekend for the photo-shy Happy Couple, seen here at a costume party last October. They have now been "officially" together for three years, which is a long time for some people and especially noteworthy when you're 19.
They've now been together through four years of high school, two as a couple, and a year of college. Those are some formative years when you either grow together or grow apart.
They're young adults now and we have significantly less quality contact with them than we once did. That's to be expected. In fact, anything else might be slightly alarming.
"Officially" is in quotes for a reason. Maybe after three years, the truth can be told. He has been sweet on her since they were fourteen or fifteen. Yes, we've been hearing her name since they were freshmen in high school. Adolescent romantic entanglements being what they are, he didn't profess his intentions until after their sophomore year. There were other people involved. I distinctly recall being impressed when he expressed his longing for her affection, but said (at 16) that he "had to let an appropriate interval pass" before he made his move. Boldy he went when he considered the timing acceptable. The rest is history. And present. And, by all indications future.
There are many witnesses who can attest that I've taken this relationship seriously from its outset. I recall a mutual acquaintence describing their relationship as "puppy love." I found it offensive at the time and the longevity of the union affirms the affront. Who's barking now?
Congratulations, Happy Couple on three years of a true by-God loving relationship. I have the greatest confidence you have been good for one another and I celebrate your anniversary with you.
Now, pose for pictures already.