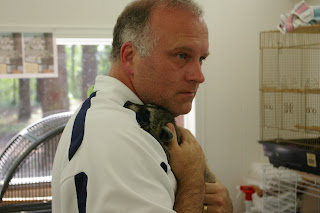 It is a sad day here at the family home. The raccoons are gone. We took them to a rehab & release program north of town. It's been a hard, sad day.
I know many will scoff at this. Raccoons are pests. raccoons are varmints. Raccoons carry diseases like rabies. Raccoons eat chickens. Whatever.

We loved our raccoons. We bottle fed them 'round the clock, taught them to climb and got them accustomed to water. They came when we called them. They showed moods and emotions. If there had been a practical way to do it, I would have kept them.
We knew, though, that they are wild animals. We knew that as they grew they would become neighborhood nusiances and nobody wants that. We learned how much they love to climb, forage and generally goof around in the bushes, so there was no way we could in good conscience confine them to a cage.
They spoke to me as I surrended custody to the nice lady at the facility, who by the way was caring for about eight more raccoons. Some were older, some were younger and she promised to take good care of our little varmint friends.
Now that's it's all behind us, I can say that the little ringtail visitors made spring 2009 memorable. Watching them grow and develop was one of the most fascinating things we've done.
Honesly, I don't know if I'd do it again. As stupid as it may sound to some, right now it stings too badly to even think about it. 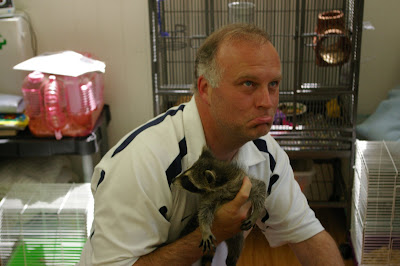