She's Not A Spaniel 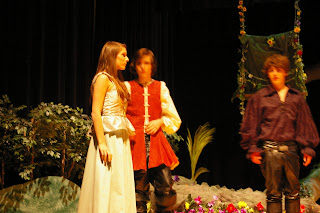 One-half of the happy couple has really put herself "out there" this week, playing Helena in a local production of "A Midsummer Night's Dream." The production was lively and well-done. The costumes and sets are remarkable. I was a little nervous for her at a certain point in Act One. Helena has a monologue, and she's on the stage alone with nowhere to hide.
We sat with our son, who seemed a little disconcerted watching his long-time girlfriend speak in rhyme and be bandied between two young on-stage suitors.
As Bill Shakespeare constructed this thing, the guys have had a spell cast on them and they are both in love (at least for a while) with Helena. 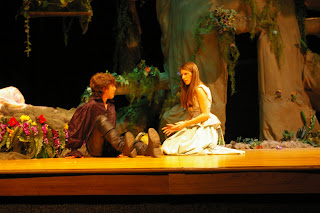 She thinks they both hate her and are mocking her. She's in love with one, however, and admits that he could treat her like a spaniel and that would be okay with her.
I told my son he should start calling her "spaniel." I don't think he liked the idea at all. If he did, he would never admit it. Just kidding, of course.
We're proud of her. She was convincing and beautiful and remembered all her lines as far as we could tell. Plus, I think he was a little unnerved seeing two guys paw on her up there. It's good for him. Maybe he appreciates her a little more now.
In the end, Helena gets her man. Maybe it works out in real life, too.