Mike Huckabee
Originally uploaded by Guy as in Gee
Welcome to Super Tuesday, apparently my last opportunity to share this story while it has any relevance. I'm pulling hard for Mike Huckabee's presidential campaign to continue. I might not completely agree with him politically or theologically, but he is the only presidential candidate I've seen in his or her underwear.
Huckabee lived in a nearby city for ten years. When he decided to enter the political arena, he had to make campaign commercials. So, he came by the TV station at which I was working to put together a low-budget ad.
He wore jeans and a casual shirt for the drive, and brought his suit along. He was changing in the restroom when nature called me. I arrived just as he was changing from his denim into his dress pants.
He stood there in his tee shirt, addressed me by name (apparently, he was a viewer) and introduced himself. We made men's room small talk. I went back to work. He went on to win the election.
He won't win this one, but maybe he'll get on the ticket as a running mate. Then, when a reporter needs the answer to the question "Boxers or briefs?," I'll be the guy with the answer.
----------------------------------------------------------- 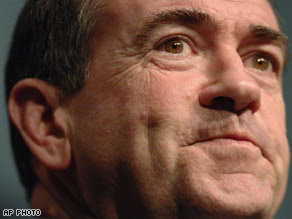 Our man is alive and kicking. CNN reports he won West Virginia. No doubt the Daddy D bump helped.

I could vote for Huckabee if only for the fact that the man has a sense of humor.

In 2000 or so they did some major renovations to the governor's mansion in Little Rock. After looking at all of their options on where to live, the governor and his wife decided on a triple wide built just outside of Indianapolis in Greenfield, IN, where I was living. It was obviously a situation ripe with jokes...the governor of Arkansas living in a triple wide? Late night TV had a blast with it.

Of course, it made the local news since it was being built here. I was headed into the city one day - I think going to work - when I ran up on the convoy heading out of town to Arkansas.

How do I know it was the triple wide for the governor? Mike Huckabee had a sign put on the rear unit: "My other home is a governor's mansion."

A funny story which happens to be true. I also got big play locally, as you might imagine.
Thanks for today's laugh.

That was also before he lost over 100 pounds, right? That makes your story of seeing him in his underwear all the more 'interesting'. LOL!