Daddy D in the Movies?

Breaking news: I got a call from a casting agency today. They were hoping I might have an interest in being an extra in a movie being shot locally. It's called "Midnight Man." Here's all I can find out about it: "Project Greenlight" winner Marcus Dunstan is onboard to direct the story of a man confronted with a kidnapping situation after he breaks into the home of his employer.
The casting guy who called me said it's a low-budget horror movie. How appropriate is that for my big-screen debut?
He said Dunstan saw my photo and said "That's exactly the guy I'm looking for." I asked "What was it he was looking for?" The answer was "A kind of non-descript middle-aged business type."
Wow! Somebody throw a bucket of ice water on me.
I contacted our go-to guy on projects like this, Times Entertainment reporter Alex Kent. He had information and advice:
I know who’s making it: Dimension Films (a Weinstein production unit) and Neo Art & Logic (an effects-driven production co.). It’s based at Mansfield Studios, and I assume it’s a horror/thriller project. The team of filmmakers (has) made four films here – two sequels each for “Pulse” and “Feast” – so they know what’s what.
Of course, don’t be surprised if your day stretches very long, especially if they are shooting effects or if they are on location. That’s just a standard, so drink plenty of water and bring a book.
Do not, however, bring a camera. (I’m sure you know this.) Almost all productions frown upon this. You might see extras taking pics, but it’s generally just uncool. Bring a book instead and find a comfy chair in the extras holding area. You’ll be doing a lot of hurrying up and waiting.
If you’re lucky, however, they’ll apply some fake blood on your brow or turn you into some random murder victim. For extras work, that’s always fun. 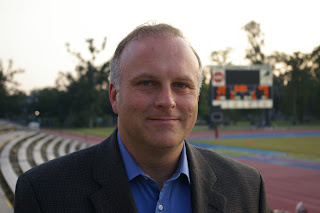 I guess if Alex is right, I won't be so non-descript. Just for point of reference, this is the photo they saw. Some things, I guess, speak for themslves. See you at the movies.

I misspoke. With that mug, you'll be more than a murder victim. I'm thinking beat cop, bouncer or mysterious man eating Snickers bar.

Good luck. Ask them if you can keep the fake badge.

Welcome to the club, good man!

During my extreme poverty days, I was an extra in all kinds of stuff. I usually was a cop because casting agents said I had a good "generic white male" look.

When I was on "Touched by an Angel" (the whole crew called it "Touched by Myself"), I got $50 and a hot fudge sundae. Not bad, really.

And I'm sure I already told you about my one freaky day as an extra. I played a Texas cop in the pilot of a show called "Texarkana." It never aired, but I got a small glimpse into my future.

This actually will be my first encounter with the film industry around town. I'm not sure I will rub elbows with any actual celebrities. Actors, producers and directors who are not exactly famous yet will have to do.
They didn't say anything about ice cream. That would be sweet!

Just be patient and expect to be waiting...and waiting...and waiting....and then....hurry up!!
Forget logic as the filmmaking process can often defy it. My first "big break" was on the set of "Dynasty" where I got to serve breakfast in bed to Crystal and Blake Carrington (Linda Evans and John Forsythe). Took forever to shoot the scene and what happened?
They cut my line and you see me closing the door on the way out!!
I think KTBS did a 6 O'clock news bit on my "bit part". I was bummed but hey...dat's show-biz!!

Chuck, I actually remember all of that. Didn't you also play a cop on a T.J. Hooker or something?

I was a cop on different shows/movies as casting director Mark Malis (formerly of Universal Studios) always said I was the "Man in Uniform / Authority Figure-type". Just yesterday I received a residual check for a couple bucks from my Officer Avery role in the sci-fi thriller: "THE HIDDEN". (1987 I think) I was "Agent Geiger" in Jerry Orbach's "THE LAW & HARRY McGRAW" and a Cop in "DR's WILDE" with Haing S. Nor (KILLING FIELDS).

I could go on and on...I actually did manage to pay the rent from 1986-88 as a featured actor. The most money I made for days worked was on the CBS Pilot: "Dr's WILDE" as I sat around in make-up/police costume for about 3 days just so I could utter the line: "Hold It...Everybody Back!!" during a crowd scene with B.J. Bailey (Ruzzo of M*A*S*H) whom I had a few beers with later and discovered his mom was from Shreveport. I wasn't on T.J. Hooker... I was on a few other shows...played a Vice Cop on "FALCON CREST" and was on "HUNTER"...and a few others, some good and others that were stinkers.

My big claim to fame lately has been as a "Dennis Quaid Lookalike" in "MAJOR MOVIE STAR" which I hear has tanked and being released to DVD. I think it grossed $386 in limited release Dec. in 8 Dallas theaters. I can now brag that my pay was half of the opening box office!! ;) The big break that never happened was when I made the cut in the final call to be sidekick/straight-man to Joan River's Late Nite Talk Show on Fox ('87) but they alternated with various stand-up comics such as Ross Shafer and I think Wayne Cotter instead... I guess I was lucky 'cuz the show tanked after two months. My agent commented that I was just a little "too whitebread" for the hip/savvy L.A. Talkshow scene, so they passed on me. Oh well.

Break a leg on your film debut, Darrell.

Hunter, not T.J. Hooker!
This is a one-day, "This is a new life experience" thing for me.
I'll sit there for twelve hours and have stories to tell.
Thanks.