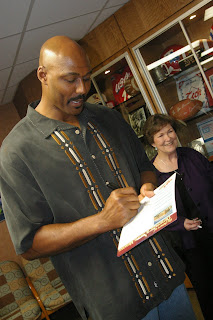 There was an event in Bossier City this afternoon which featured one of the greatest basketball players ever, Karl Malone. Malone, known as "The Mailman" (because he always delivers), patiently and graciously signed autographs. He posed for photos and basically did all you would want a visiting celebrity to do.
Fame is relative, however. While Malone was being swarmed by admirers, a lady embedded in the throng got my attention and asked, "Who is that?" I explained that he's a great basketball player who has an Olympic gold medal and played for many years with the Utah Jazz and the Los Angeles Lakers. There were photos and souvenirs of his stellar career surrounding us. I pointed out some of them.
She asked, "What's his name?"
"Karl Malone."
"Oh, I think I've heard of him," she replied encouragingly.
Then, as she looked through the trophy case, she got excited. She tapped her husband on the shoulder when she saw a framed photo of someone she actually recognized. Her breath became a little short and her voice rose an octave as she exclaimed, "Look! Regis!" 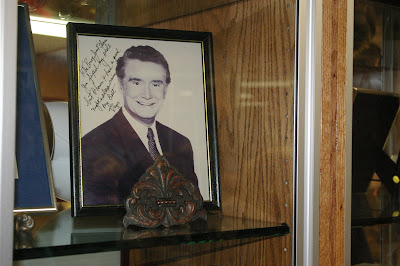 You go with what you know.