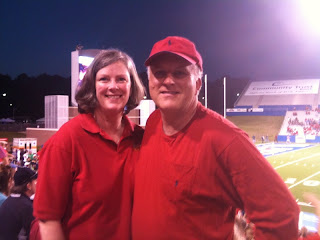 We decided to be good sports and play along with our pals at Louisiana Tech, who moved one of their high-profile football games to Wednesday night so they could be on national television. With an opportunity to show themselves off, the fine folks in Ruston asked all fans to wear red. We were happy to oblige, as were approximately 19,000 of the 21,000 or so people who showed up. It makes you wonder how the redless rebels missed the message. 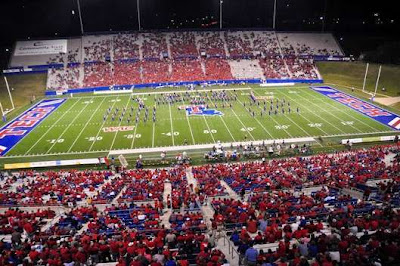 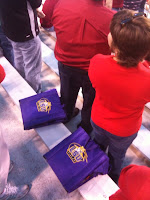 The reviews are in and Tech came off well.
They beat Hawai'i handily and the "red out" looked great on TV. The evening was beautiful, climatologically speaking. All in all, it was a wonderful way to spend an autumn Wednesday They might be onto something here. They even found a way to get LSU fans into the stadium. Maybe Saturday football is overrated.
----
Oh, and there was an incident. There is a brand new, fabulous giant video board at the stadium. They are having a lot of fun over there putting fans up on the big teevee. So, there was a contest where people were asked to dance to win a free pizza. We were all having a good time watching those crazy kids shake what they got. Based on cheers from the crowd, the contest was narrowed down to a young woman in red and a young man in red. Then, there was a "hey, wait a minute" moment. We knew the guy! It was the Tech freshman who dates our daughter. We sent her a text saying, "Hey, your man just won a free pizza!" There are no secrets in Ruston.