Know Your Audience at the Costume Party

We were invited to a "costume mandatory" party. It's Halloween season, so that was imminently appropriate. Being sports oriented, we were proud of our costumes. We went as suspended Southeastern Conference refs.
It all came together nicely, we thought. It was a Saturday night and games were being played. 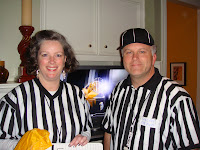 The officials couldn't work becasue they're suspended for two weeks. So, they were free to go to a party. Am I right people? There was no subtlety involved. I wore a wrist band that said "Suspended by the SEC." I had a sign on my pocket that said "Will Ref for Food."
The officials originally called attention to themselves by calling "unsportsmanlike conduct" penalties late in the LSU-Georgia game, so my wife brought a dry erase board with "excessive celebration" written on it. 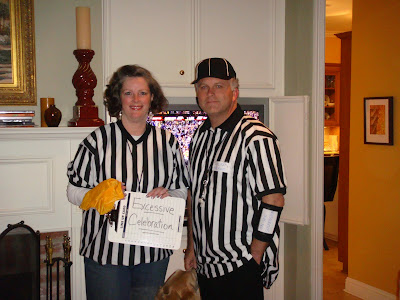 We even borrowed a real penalty flag from a high school line judge, and she sported it prominently. It lent an air of authenticity to her costume. We were so proud.
Only one person got it. One guy at the party said, "Hey are you the suspended refs?" He laughed and his wife looked at him quizzically. The rest of the time: nothing. We had to explain it. They didn't get it. They hadn't heard about it.
That's what we get for going to a party with a bunch of intellectuals. If we had gone as destitute doctors and said we were the Obama Health Plan we probably would have been a hit. That's okay, next week we're invited to another party and this time we KNOW there will be sports people there. We'll give it another whirl. Then Halloween will be conveniently behind us at the same time the refs are reinstated by the conference.