The Stress of Public Address

Over the last three football seasons, I have been asked on numerous occasions to perform public address duties at local football and basketball games. I have certain standards. To me, it is vital to understand that the PA man is not a play-by-play man. The guys in little stadiums who do play-by-play over the PA speakers just don't understand how obnoxious they are. If you want to do play by play, get yourself a radio deal. This is not my point, but to me it's important to get that out there. Know your role and stick to it. PA does down and distance, penalties, player names after the play, not during it. The PA voice should be a complement to the action, not part of it. Philosophical position statement complete, on with the story. 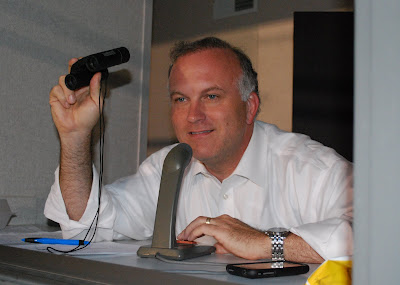 An old friend had occasion to attend a game at which I was working. Her kid's squad was visiting the team which had hired me. She liked what she heard and asked me to perform similar duties at a special event for her child's school. I immediately agreed, thinking I would do it as a favor. She insisted on negotiating compensation with me. I insisted right back, for many days, that I would do it for her as a favor because her friendship means more to me than money. She demanded a number. I wouldn't give her one. Finally, it came down to this. I said, "I don't want to ask for money because I don't want you to think I'm unreasonable, but since you keep asking, I'll say this: I would truly rather do it for free than do it for fifty bucks. Does that make sense?" I guess it did because her organization came up with something north of fifty and I awkwardly proceeded.
If you can measure value in stress, I earned every penny.
I arrived at the venue armed with a script, other important papers and some binoculars. I was all set. This was all well organized and painstakingly planned. There had been phone calls, e-mails and even a meeting to go over every detail. We wanted to be sure every name was pronounced correctly, every child and parent was appropriately identified. We wanted to leave nothing to chance. All I had to do was read and react.
Someone else was assigned to run the music. It became obvious that great care was taken to plan that aspect of the event, as well. We were poised to work in harmony to make middle school magic! One little detail was overlooked. No one tested the sound system at the stadium. The CD player was broken. Incredibly, even though we are a decade into the 21st century, there was no way to play music from a computer. A solution was discussed: Just get a boom box, turn it up loud and hold the PA microphone up to the speakers. Good idea, but no one had a boom box.
There were frantic phone calls. There was elevated blood pressure, heaving, sighing, borderline hyperventilation. I cowered in the corner with my little microphone, content to contain myself to my announcer duties while chaos reigned supreme in the press box. Moms were getting upset!
I tried to stay out of the fray, but one wigged-out woman just would not let me. A cheerleader mom for the opposing school, she witnessed all the operational troubles which beset our event from the outset. BUT....her daughter and her friends had not been given an opportunity to perform their one minute and 37 second routine.
The fact that the home team mothers and their daughters were in full freak-out meant very little to her. She demanded that I do something about it. Her girls needed to perform!
I explained with politenness and an uncharacteristic abundance of patience that I was simply the hired help; my role was only to make announcements and I had absolutely no authority nor did I have any interest in accepting any. She didn't care. I had to do something. No, I didn't. Calmly, time and again I attempted to refer her to the proper decision-makers. She would not listen. It was an exercise in personal discipline for me to not raise my voice. Finally, she relented and called the right person to work out the details.
With palpable tension mounting among the moms, a boom box was secured and the festivities moved forward, significantly altered but essentially complete. Our overbearing visitor's girls got to perform. Better late than never, I suppose.
The mother who was troubleshooting the music issues left the operational area to participate in her own daughter's activities. Subsequently, the overly assertive visiting cheer mom re-emerged asking to speak with her. I knew this could not be good. Oh, did I mention that the visiting kids were representing a prominent local church school? When church-school cheer mom asked for beleagured music mom, I said "Hey, she went to get a margarita." The response from the woman who witnessed all the chaos? "Really? We don't do that kind of thing." So now we are being rebuked and judged harshly.
She actually flipped open her cell phone and called someone. When her connection was made, she said "She's not here. She went to get a margarita." At that moment, three people wheeled at once and set her straight: "She did not really go get a margarita!" I think there was a "for God's sake" thrown in there somewhere, along with other suddenly appropriate exclamations. I think I said something about Jesus turning water into wine, at which point she said "He didn't get drunk." Now, we're in some kind of Catholic vs. Protestant theological spiral and it has just become preposterous. All the while, I'm just trying to say these kids' names right.
Finally, chastised and suddenly feeling unwelcome (hopefully), she just went away.
The rest of the evening went off without a hitch. It took a while for my breathing to return to normal. I'm proud to say I didn't raise my voice, but I did strongly consider going out for a margarita after the event.
They didn't pay me nearly enough to endure all that.